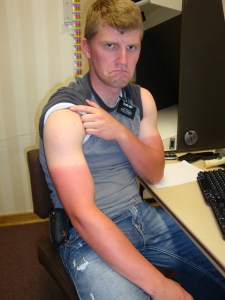 The controversy around the Renewable Heat Incentive scheme, an attempt by the Northern Ireland Executive to help to increase consumption of heat from renewable sources, has taken a further twist this morning after a whistleblower from Strabane produced more damning evidence of its misuse.

Leaked photos confirm that farmers from all over the county have been visiting a shed in Strabane which has been fitted out with 50 hi-tech sunbeds, fired by burning millions of wood pellets being sold on the black market by a strawberry farmer in Eglish.

The anonymous source, who was a long-term user of the sunbeds until a bad burning when he fell asleep in one, revealed the extent of the racket:

“Why did you think farmers had a deadly tan in winter? We all use the ‘Strabane Shed’ as it’s known in farming circles, some times three days a week, free of charge. Yer man is making millions whilst sporting a glowing tan all year around and the women hanging off him in he town. But it has to stop. The Health and Safety Policy is non-existent.”

Additionally, the puzzle of the prevelance of giant tomatoes across the county this year has finally been solved as other whistleblowers explained how sheds were also using the RHI scheme to create enormous fruit and vegetables. One such tomato was shared over 4 million times on social media after it was purchased on the side of a road near the M1. The picture showed that the tomato was bigger than the car wheel of a Seat Ibiza.

“What don’t we know? I’ve heard stories that these sheds, with the heat powered by burning wooden pallets from the Moy, were being used to make really big sheep…you’d have to wonder why.”

Arlene Foster has yet to comment on this new evidence.