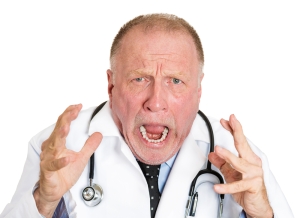 Soon after a report by a chief medical officer who warned of a “post-antibiotic apocalypse” due to a natural resistance to the medication, it has emerged that doctors have attempted to address the problem themselves by giving blunt and accurate advice to complaining patients.

Hundreds of barely-ill members in various surgeries across the county have been seen leaving medical establishments in tears after being told to ‘f**k away off’ by doctors determined to raise the effect of antibiotics in years to come.

Two sisters from Fintona, Mary (68) and Ellen (66) Quinn, explained how they were recently dismissed from their local surgery with a barrage of abuse ringing in their ears:

“We were both suffering from mild throat irritations and were hoping for a short blast of an antibiotic to clear it. Dr Johnson took us in and after a few polite comments he looked down both our throats. He walked back to his seat, scratched his chin, and said ‘yiz can f**k away off now and drink some water’. We left in floods of tears. There’s surely a better way of dealing with this crisis.”

Similar stories were being regaled across the county, with an elderly man in Strabane told by his doctor never to darken the door of his surgery again after asking for an antibiotic for an ear infection. The offended man torched his doctor’s car later that evening.

A surgery in Dungannon was picketed today after one of its doctors gave a patient, who was complaining of a nasal blockage, a banana and a glass of Lucozade. The one-man picket drew a blast of a car horn of support from three seperate cars.