England To Parade Cup Through Cookstown On Way Home If They Win, Like Derry In ’93 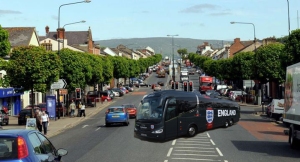 A leaked itinerary of homecoming parades if England win the World Cup has revealed that one of their first stops on the way home from Russia will be the Main Street in Cookstown.

25 years after Derry pulled the same stunt without warning after winning the All-Ireland, dentists are worried about a repeat of 1993 after they were pushed to breaking point with so many gritted teeth injuries.

Cookstown Head of Festivities Joshua Sheehy admitted they weren’t surprised at the news:

“England would be well aware of what Derry did in 1993 in Cookstown and how it mentally affected Tyronies for decades. Squints, broken teeth and a rise in cursing have been the classic side-effects to this day from seeing Brolly and Tohill blow kisses to Cookstown ones. For England to parade up the street will finish many off for good.”

The document also revealed that, if successful, the England bus will stop off at the Maxol station beside the Cohannon Inn after the Cookstown parade and will probably order cowboy suppers from PG Chips  although Harry Kane just wants a sausage supper as the beans gives him wind.

Meanwhile, Omagh officials are considering erecting a big screen at Healy Park if the visit of Dublin coincides with the World Cup final if England make it. The screen will not show the game but simply be used to warn spectators not to turn on the radio or TV if Southgate’s men win, for three months.

Original Theme Music - Philosophy On Life, The Universe And Everything...