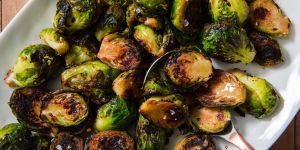 After 500 years of pretending to like them, the Belgian nation have finally admitted that Brussels Sprouts were all a big joke and that they were tired of it now.

The sprouts, whose distinctive taste has been described as something you’d likely to experience if you licked a toilet bowl, have been a staple feature of Irish dinner tables since the early 1900s despite pleas from children not to ruin the day.

Belgian minister Henry Poirot admitted today that enough was enough and that it was time to wise up:

“I think the joke had worn thin at the turn of the century but we let it run what with the recession and all and the need for light relief. But with Brexit on the horizon, we feel it’s time to let you all know that we were only codding. We hate them.”

Over 19 million sprouts were bought in Tyrone just last week with fights breaking out all over the county’s supermarkets with children refusing to accept another year of sprout eating hours after their happiest morning of the year.

Meanwhile, Santas across the county have been accused of forsaking the spirit of Christmas after charging up to £100 a go for children to sit on their lap to get a selection box and a pile of crayons.

Posted on December 17, 2019, in GAA and tagged brussels sprouts, santa. Bookmark the permalink. Leave a comment.