Glenelly Man Confident About Selling Painting Of Sausages For £100 Million 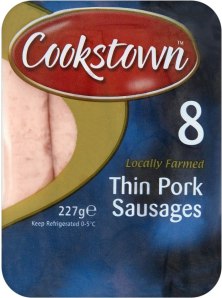 A man from Glenelly yesterday announced that a painting he drew at the weekend will go to auction with a reserve price of £100 million.

The announcement comes only days after a painting by Irish-born painter Francis Bacon was sold for a record-breaking £89m just last week.

“Them Dubliners have always been a bunch of chancers”, declared Malkie McArdle, an unemployed rain maker, who only took up painting at the beginning of October. “He painted this half-arsed picter of a man or a spoon or a tree or something. I’m a bit fuzzy on the details. A bit like that fecker’s painting in fact. Anyway, he stuck a hefty price on it and some eedjit went and paid it. I thought to myself, I could do that. So I have done”.

His piece of art, entitled, ‘Sausages At Rest’, depicts a value-pack of a dozen Cookstown sausages which he found at the back of the fridge.

“There was this boy years ago who done a picter of tomato soup or baked beans or something, and he got a lock of pounds for it too”, said McArdle. “So why not sausages? This is a one-off. Them sausages is all
eaten up so it can never be re-created. That’s why it’s so expensive”.

The painting was created using a mixture of engine oil, crayons, mud, and some Tayto crisps which accidentally fell onto the canvass.

“The famous artists like Rembrandt and Van Gogh and the one that was the policeman were always using oils and the like, so I did the same”, said a proud McArdle. “I had a wee can of two-stroke sitting in the shed that I use for the lawnmower. It all went a bit runny and if I’m being honest the whole yolk looks a bit shit, but that’s not the point. Some boy in Florida or Paris or Americay or somewhere’ll pay big money for that. I’m just sitting back and waiting for the call. Deadly”.

McArdle is adamant that the £100 million asking price is firmly non- negotiable, although he has said privately that he would consider settling for £5 or another pack of sausages.