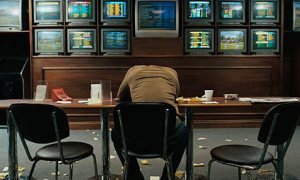 Man pretending to be Campbell

A Clonoe plasterer, who has been accused of acting the big shot by neighbours this week, has yet to claim his winnings from the Grand National after he put £1 straight on Many Clouds which won at 25-1 ten days ago.

Peader Campbell (37), who almost missed putting the bet on in time due to a failure to put his clock forward an hour two weeks before that, maintains he’ll pick up the £26 ‘some time in the future‘ as he wasn’t too bad for cash at the minute.

Neighbour and friend of the family Johnny Dooley explained how Campbell’s reluctance to claim his winnings hasn’t gone down well in the community:

“Who does he think he is? You see him out mowing the lawn and smirking to himself. I even saw him with a new jumper on him at Mass on Sunday and him still to collect the money from the bookies. He’s really rubbing our noses in it.”

Local bookmaker Declan O’Neill revealed he turns away up to a dozen Peader Campbell imposters a day who attempt to claim the money dressed like a plasterer or wearing a jumper similar to Campbell’s new one.

“Even his wife came in yesterday pretending to be her husband. He has 30 days to collect it so it’s only going to get worse. It’s great publicity all the same. I’ve already a banner up outside the shop saying ‘The Bookies Where Campbell Won £26’. “

Campbell has yet to reveal when he will collect the winnings. Rumours suggest he will buy a fish supper and Fanta Orange from Landi’s with the money and use the rest for general groceries.