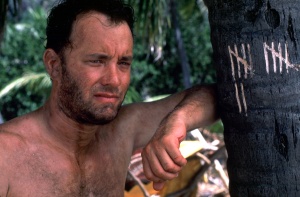 Following intense social media speculation that Cast Away 2 possibly starring Tom Hanks again is to be set in Urney in West Tyrone, local dignitaries have warned the multi-Oscared actor that he should expect no preferential treatment from local businesses or services for the duration of his stay near the Donegal border.

Twitter and Facebook were awash with rumours that a second instalment of the feature film, which starred Tom Hanks as a successful systems engineer who falls out of a plane and ends up living on an island for four years talking to a ball and growing his beard, is to be set in one of the remotest parts of the planet with no Internet with Urney emerging as an odds-on favourite.

Urney, which means ‘deadly quiet’ in Irish, also came close to landing the location of Mississippi Burning in 1988 but eventually lost out to Mississippi. Lord Mayor of Urney Prionsias Pilatey sent an important signal to the production team of Cast Away 2:

“We’re not star-struck type of people. In fact we’re the opposite. It that bollocks Hanks arrives here in his BMW and starts ordering caviar for breakfast served by a 38-year old virgin then he’s another thing coming. We have neither of those things here anyway.”

After intensive research, the Tyrone Tribulations media team could find no official plans to make another Cast Away and traced the origin of the rumour to the Twitter account of Strabane teenager Terence Wiley (@thestraman) who tweeted ‘no fcukin internet signal in Urney. It’s like Cast Away 2.”

Tom Hanks was unavailable for comment or something to that effect.