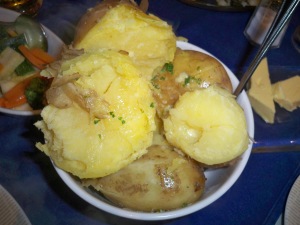 Derrytresk GAA’s new manager Joswano Malinko has stunned the senior squad after enforcing a ban on consuming a plate of spuds on the morning of a match, and extending it to turnip and cabbage on Championship days. Malinko, who originally hails from Faro but has been working as a bouncer outside several Dungannon watering holes since 2006, claims there is strong scientific evidence to suggest that a slap of spuds impairs performance for up to nine hours after consumption.

During his first press conference at a corner of the field before the friendly against Maghery, Malinko reminded players he would be checking through windows to make sure the ban was being enforced:

“I have the addresses of everyone and I’ll be doing spot-checks during breakfast. When they least expect it I’ll pop up from under window sills.  One of my best friends is Jose Mourinho and I was telling him about the Derrytresk ones eating plates of spuds with their jam in the morning. He took a quare laugh.”

Ex-captain Paddy Mulgrew reckons Malinko has made a big mistake early in his management career, citing the traditional nutritional benefits of the potato before a game:

“I’m a bit annoyed by this. For years we’ve been almost unbeatable at home and that’s undoubtedly the spud-effect. A man with a bellyful of potatoes and cabbage is far harder to shoulder over the sideline. This Portygal boy has waltzed in with his fancy dan ideas like omelettes and orange juice and thinks he’s deadly. Well, we’ll see. There’s boys already talking about filling their boots with spuds and eating when they can during games. This’ll not end well.”

Bookies have stopped taking bets on Derrytresk exiting the Championship in the first round, suspecting they’ll throw it in order to kill the turnip ban early on. 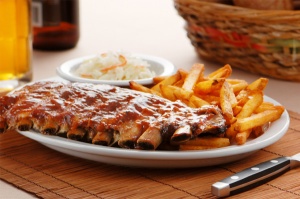 What the hell is it?

A new restaurant recently opened in Dungannon has denied accusations that it has been serving up animals killed by traffic on the nearby motorway.

‘McGlone’s Dead-Tasty Restaurant’ in Irish Street, which was opened only two weeks ago by former slaughterhouse worker Eugene McGlone with the slogan, ‘Fresh Meat, Straight From The Grill’, prompted a series of complaints to the Foods Standards Agency about the source of many of the ingredients.

“It says on their website, ‘Come in and enjoy our great food, just off the M1’. Now I know exactly what it means. Scraped off the bloody M1, that’s what. The hoors. I wouldn’t go back in there if you paid me. The menu’s a disgrace. Shepherd’s Pie my arse. More like German Shepherd’s Pie”.

Diners became suspicious after finding that nearly all the main course dishes were peculiarly flat, including, ‘Eugene’s Four-Meat Omelette’, ‘Protein Pizza Platter’, and ‘Begley’s Big Meaty Pancake’, a dish comprising what appeared to be a number of different types of unspecified meat.

“Jays, you could practically smell the engine oil off the food. It gave me the heave. If that McGlone thinks I’m going to put his ‘Meaty Waffles’ anywhere my mouth, he can think on. Anyone who seems to take Toad In The Hole literally is in the wrong game. I tried complaining, but the music was so loud you couldn’t hear a thing. The menu said that they serve up ‘bumper portions’. Now I know what it means”.

McGlone however refused to be drawn about the source of his food.

“All I’ll say is that we’re very aware of the importance of sustainability and the environment and suchlike. That’s why all of our food is local, from within 10 miles.  Or 20 if you go as far as the M12 to Cookstown. Some of them lorries are going deadly fast”.

McGlone also denied that the background music was turned up loud to drown out the sound of diners retching.

Rumours also surfaced that McGlone was spotted last Thursday night standing on the side of the M1 near Moygashel with a pepper grinder, a spade, and a hopeful look on his face. 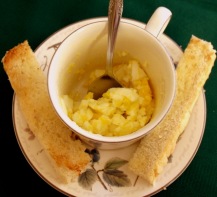 The much-awaited performance on Masterchef of Ballygawley balloon blower-upper Malachy Kelly was ‘a bit dung’ according to his mother and fiercest critic, Angela. The long-running BBC food gameshow had yet to entertain any competitors from Tyrone before Kelly’s appearance last week and it is unlikely there’ll be any more. The theme for the Ballygawley man’s episode was ‘Egg Surprise’ where contestants had to come up with an egg-based dish to woo the judges Gregg Wallace and John Torode. Angela Kelly pulled no punches in assessing her son’s performance:

When I saw what the other three competitors were cooking, I knew our Malachy was in trouble. The first girl did some kind of exotic Carribean omelette with mad ingredients like green peppers and leeks. Thon boy from London made ‘egg foo young’ with scallions and it looked deadly. Finally the Australian woman cooked these massive scotch eggs that’d feed the whole of Aughnacloy. Malachy looked a bit pale at this stage.”

Calling his dish ‘Egg Bateupinacup’, Kelly boiled two eggs for ten minutes, rinsed them under the tap for half a minute, peeled off the shell, threw them into a cup and slapped in a lump of butter before whisking it with a teaspoon. On handing it to the two judges with two small bits of unbuttered bread, the sweat was pouring down his face.

“Embarrassed. Egg beat up in a cup. Holy Jaysus. The fancy name threw them at the start and I could hear the judges discussing whether it was some kind of Irish language dish. The only good part was the dramatic music when he cooled the eggs under the tap. You could see the pain in his face as he struggled to juggle the hot eggs for about fifteen seconds. To be honest I got a bit emotional at that part.”

Gregg Wallace called the dished ‘underwhelming’ and ‘a joke’. Torode thought he put in too much butter. The show will air on Christmas Day 2013. Malachy returned to Ballygawley last night and was paraded around the town on the back of a trailer to 12 ecstatic well-wishers with only the odd bit of abuse shouted.