The creation by an Omagh housewife of an omelette that coincidentally looks ‘almost exactly like Tyrone’, is expected to take pride of place in a hastily-convened showcase at Croke Park.

44-year old Philomena McCaughey was making a two-egg cheese omelette for her husband Peader, when she noticed that it looked quite like Tyrone.

“It’s mighty. It looks almost exactly like Tyrone if you look at it sideways-on with your eyes closed a wee bit. And I had thrown on a big pile of grated Crackerbarrel that made it look just like the Sperrins, especially if the Sperrins were yellow and a bit more cheesy-looking”.

McCaughey’s husband admitted that the eggy phenomenon looked a little less like Tyrone after he devoured the south eastern part of the omelette, around Clonfeacle, whilst waiting for RTE to turn up.

“Aye, that’s true. I was as hungry as a horse because we had run out of eggs and Philomena hadn’t been to Newell Stores yet. I just had a wee corner of it though. It now looks like Aghaloo’s been wiped off the map, but sure, they won’t mind. It still looks deadly”.

“RTE never turned up. Their loss. The very least we were expecting was Sky News and some reporters from London, or maybe some of them celebrity chefs like Jamie Olivers or Laurence Llewelyn-Bowen. In the end we just took a photo of it and stuck it in the fridge next to the Kerrygold”.

The pair have offered to stage an exhibition of the so-called ‘Omagh Omelette’ at Croke Park in place of the cancelled Garth Brooks’ concerts later this week.

“At least people would still get their money’s worth”, said Peader. “We’d have the Omelette on a big video screen and Philomena could play the spoons while I sing Friends In Low Places, so that people still think they’re getting a bit of the Brooks’ magic, while they’re looking at the Omelette. I’m some chanter once I get going. And for a lock of extra pounds I’d be happy doing a couple of matinee performances”. 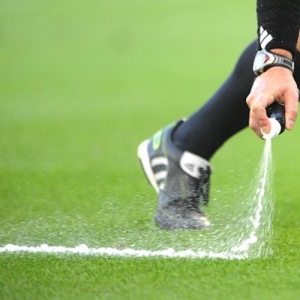 A Dungannon-based traffic warden has started employing the use of the ‘vanishing spray’ currently being used by referees at the Brazil World Cup, which marks where defenders have to stand during a free kick. The spray disappears after a few minutes.

32-year old Fergus Devine, who courted controversy earlier this year for frequently conducting victory dances around cars to which he had issued parking tickets, began using the spray last Saturday, firstly on cars, and latterly on pedestrians.

“You see some of them cars edging forward at the lights, waiting for green”, explained an unrepentant Devine. “That’s where my spray comes in, see? If they think they can start moving just because the light changes to amber, they can think on. Drive over my wee white line and they’ll get a ticket slapped on their windscreen pronto”.

Complaints were made not just by drivers but also by pedestrians who have attracted Devine’s attention, including Caledon’s Clodagh Rush, who was accosted by Devine coming out of Lowe Butchers on Dungannon Square on Monday. She explained,

“He stopped me and started spraying my shoes, the clift. Said he was giving me a warning because of ‘dangerous overtaking’ coming out of the shop. All I did was squeeze past Mrs Donnelly who was having trouble managing her zimmer frame and bag of mince at the same time. He made me stand there like an eejit for five minutes until the white stuff went away”.

“Aye, it’s deadly stuff is right”, proclaimed Devine. “There’s too many of them pedestrians eager to jump about the road like they own the place. It’s only me that’s allowed to do that. I’ve had the training. If they don’t want to wait for the wee green man then they risk getting my aerosol all over their tootsies. They’ve been warned”.

Asked where he had procured the spray, Devine said,

“I got it off a pal of a pal who lives in England, Wayne I think his name was. He came back from Brazil with a suitcase full of the stuff. Don’t know what he was doing over there, but apparently he said there was no way he was coming back empty-handed”.

56-year old Fergus Faloon also incurred the wrath of Devine having come out of Dungannon Library ‘without due care and attention’, by walking and eating a Twix at the same time. He now faces a ‘two-booksale ban’ at Dungannon Library, but plans to appeal.