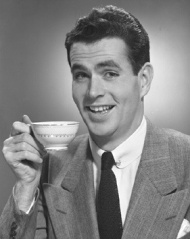 An initiative by Galbally Civil Council to sober up the locals for a full month has witnessed varying degrees of success. Whilst random lane-brawling has seen a decrease in incidents, the side effects of a much soberer community have been devastating. The self-styled ‘King of Galbally’ Pat Tally (50) offered an insight into life in Galbally over the last month:

“It hasn’t been great, personally. After about three days of sobriety, the wife was sufficiently dried out to take a good look at me. It dawned on her that I looked a bit like that elephant man boy. Whilst intoxicated she must’ve thought I was Galbally’s answer to Robert Redford, and we’ve been married 28 years. She won’t even look at me now without either laughing or retching. It’s cat altogether. I wish she’d take a charge at it so we could get back to marital ignorance.”

Housewife Roisin Murphy (29) revealed other crippling side effects of sobriety in the area:

“Before the hubby sobered up, he was a great handyman. Plumbing, wiring, hammering – he could do it all. Now he cannot even dig a hole. He’s a useless lump. It seems that the stout gave him some sort of super-powers. Others are saying the same. Galbally’s falling down around us as the men are now reading books and writing oul stupid love poems. This sober craic is a disaster around here. The cattle are learning to milk each other, that’s how bad the neglect is”.

Some residents have welcomed the period of sobriety. Johnny Nugent (44) says he’s a changed man:

“Jaysus, I’m a new man. This morning I made toast and tea for the whole family. I never thought I could do that a month ago. I shower nearly every other day and the wife and I have had some deadly kissing sessions. In the past I’d have headed out the door to the site without spakin a word, with three half’uns already in me. Flip, I mightn’t drink again.”

The ‘Sober for July’ experiment ends on Wednesday