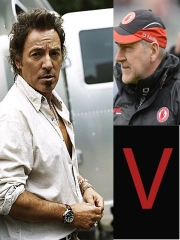 In an unprecedented move, US ambassador for Ireland Hank Power has arrived in Clones to broker a peace deal between Bruce Springsteen and Mickey Harte who have been at loggerheads for 24 hours over the timing of Saturday’s concert and Tyrone/Kildare game. Delegations for both parties arrived in Clones on Tuesday morning to thrash out a deal that hoped to see Springsteen delay the start of his concert til about 11pm to cater for the returning Tyrone fans from Newbridge.

After three hours of stalemate, Harte and Springsteen arrived to slug it out head to head with both in bad twist about being woken up. It is understood that Harte promised to win or lose the game in normal time so that there’d be no extra time and all fans and players would be at the King’s Hall by 11 if he delayed it to then. An eye witness told us that Springsteen lost the head:

“Bruce lost the bap completely like. The veins were showing in his neck and he was saying things like ‘You think you’re the boss. I’m the boss goddamit’. Harte was giving it out well. He was shouting ‘Born In The USA? I was born in Glencull and don’t you forget it.’ I thought the boxing was about to start.”

Springsteen attempted a compromise by suggesting he put a big screen up showing the game so that Tyrone supporters could enjoy both at the same time. He said he’d even sing Old Ardboe or the Hills Above Drumquin. Harte rejected the offer, stating that it would affect the players knowing their family and friends were at the concert. Things turned nasty with Springsteen saying the “Glory Days” were well and truly over for Tyrone and that Mugsy should be in the squad. Harte told Bruce he could ‘sing none’ and that in terms of another All-Ireland he was still very much a ‘hungry Harte’.