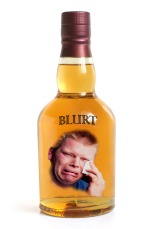 After a series of rigorous scientific tests, Clogher Distillery have finally unveiled their new brand of whiskey with three distinctive after-effects depending on your chosen mood – crying, fighting or singing.

Distillery director Seamus Mulgrew maintains his whiskey will revolutionise pubs and clubs around the country, enabling bouncers to predict how the night will pan out:

“We’ve tested it over and over. ‘BLURT’ whiskey, if consumed with water, will have the drinker crying uncontrollably about emigration, the state of the country, dead relatives, failed romances or football defeats in their youth. ‘WARBLE’ convinces the drinker to think they’re a Grade A singer, like Tina Turner or Malachi Cush. Finally ‘SLAP’ encourages the customer to pick a fight with the next person who looks at them. With science behind us, bars can predicted whether it’s going to be a bawling or boxing match.’

SLAP whiskey was already tested out in Falls’ pub in Derrylaughan during a meeting of the Lough Neagh Anglers Association. Bar staff confirmed that a mass brawl of fishermen ensued, with rods inserted in places they wish not to describe in print. However, Clogher distillers were unhappy with the results after they found out that this was a relatively normal occurrence in the lough shore pub.

BLURT will be tasted tonight during the Ardboe Book Club monthly meeting at the Battery Bar, immediately after the 15-strong female readership discuss their book of the month – Dead Puppies In Heaven.

Finally, WARBLE has already been banned at wakes and funerals for fear of having to listen to 32 verses of songs about sons going to Amerikay and never returning.