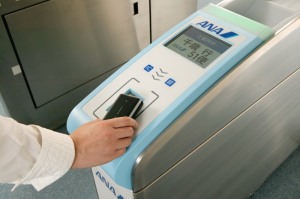 A Dungannon woman was made to wait over 145 minutes after security was called during her check-in at Belfast International Airport due to a message she received at the moment of mobile-device scanning.

It transpired that Moira McFerron was checking in using her smartphone app when her husband, at home in Dungannon, decided to send her a picture of his backside in an attempt to keep her happy. The image of Denis McFerron’s posterior appears to have caused a serious malfunction in the airport’s multi-million pound high-tech computer system, resulting in a series of delayed flights as well as two cancellations.

Moira, who collects money for a range of charities, maintains she hadn’t a clue her husband could do something like that:

“Why the hell would I want to see that man’s arse? Sure I’d only left the house 3 hours earlier and was only going to be away for a lock of days in total for a hen trip. What he did has ruined the holiday. Especially when the police printed out the image, magnified. Denis has got the whole sexting things arse about face, in more ways than one.”

“Due to our customer privacy policy, we’re not at liberty to reveal what actually happened suffice to say it was a hair-raising experience.”

Denis, who was unavailable for comment today, received a smart phone as a 50th birthday present last week and had apparently been getting carried away about how quickly photos could be sent and had already been cautioned for sending his neighbour a photo of his wife showering ‘for an oul laugh’.