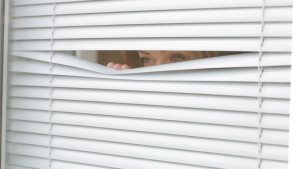 A gang of about 12 Ardboe women, who peak through their venetian blinds at other members of their community going about their daily business and posting it online, have upped their reign of terror by setting up a blog whistle-blowing on people who are getting Jobseekers’ Allowance whilst working locally.

The notorious group also vowed to expose alledged under the counter deals, people driving whilst texting and general gulpin behaviour on their multiple social media sites by purchasing more venetian blinds for other minor rooms in their houses to look through.

Polly Coyle, the notorious Head of Operations for the Peakys, added:

“This is a new period of expansion for us. Ghost-oh, but the price of the venetian blinds is killing us though. And plasters too. A few of our women have sliced their fingers on these new razor-blade blinds. Our order of the Peaky Blinders will have to change to softer-edged ones.”

To date, the Peakys have waged war on communist Moortownians, Ballinderry unionists and pledged to sort out the Brocagh mafia before the year is out.

Meanwhile, a suspect crystal meth lab in Lissan which was raided on Monday has been deemed a false alarm. A local school teacher and his ex pupil were released after it emerged the lab was simply an elaborate poitin-making operation which is still legal in the village.

A man has privately admitted that his boasts of completing four exhausting marathons in as many weeks relate not to running 26-mile marathons, but in fact to lying on the couch watching entire series’ of television programmes in one sitting.

Paul McElhatton, a 28-year old banana ripener from Benburb, spent all day Monday recovering from what he called ‘one the most intense marathons he had ever endured’.

“You have to prepare for these things”, said McElhatton. “I did no training at all for my first one, and it was bad. Breaking Bad, all five seasons series of it. House of Cards wasn’t quite as tiring although it was quite difficult to follow, but a multipack of the Tayto gave me the strength to get through it. To be honest, it was actually my third marathon, Homeland, that I found most draining. Was yer man going to blow up lots of people or not? Was he going to get found out in time? It was a shattering experience. You try sitting on the edge of your seat for forty fecking hours. I had to phone in sick the next day. My arse was numb for a week”.

But his family are still under the illusion that young Paul’s marathon exploits relate not to television-watching but to pounding the streets in running shoes. His mother, 62-year old Bridie, said,

“We’re so proud of him. I know his third one took twelve hours which raised a few eyebrows, but then he is carrying plenty of beef on him, bless him. But he’s very modest about it. He’s got a tara amount of energy. I asked him if he had to lie down afterwards, and he said that was the last thing he wanted to do. I don’t know where he gets it from. I remember when he used to live at the homeplace, all he did was sit watching telly all day. Look at him now”.

McElhatton explained that all his hard work is paying off.

McElhatton, hard at the training

“It does get easier the more you do it”, he said. “By the fourth marathon it had all become a bit of a game. Of Thrones. Thon one set in the Titanic Quarter, but with dinosaurs and stuff. Over thirty hours, but I sailed through it”.

As of last night, McElhatton was preparing for his fifth marathon watching all 120 episodes of ‘Friends’ by learning all the words of ‘Smelly Cat’.

New Crime Drama Set For Tyrone – “Get Off My Land”

Get Off My Land

Following on from the success of crime dramas such as The Sopranos, The Wire, The Fall, Breaking Bad and Love/Hate, a group of Tyrone acting enthusiasts have put together a script for a hard-hitting TV series set in Greencastle regarding the murky world of turf smuggling and the gang wars associated with it. Titled “Get Off My Land”, a gang of seven 20-somethings terrorize mid-Ulster by smuggling cheaper turf in from Derrylaughan and Carrickmore which burns longer than the local stuff. They are opposed by local bog men and things quickly spiral out of control with drive-by shootings and all sorts of carry-on.

Tyrone Tribulations managed to catch a glimpse of the script. Bad words have been hidden by asterisks and other buttons on the keyboard that aren’t used much:

Red Paddy: Where’s me f*&king money ye gope?
Jim: I don’t have it Red Pat. But I swear. I’ll have it next week. I just need two sods to do us this weekend
Red Paddy: I’ll blow yer f**kin head off ye clampit. Give me my five pounds.
Jim: Please, Red Pat. The wife’s giving me tara abuse about being foundered
Red Paddy: (lifts gun and shoots Jim in the foot) Take that ye f%%kin balax. Get off my land. (applause)

“It’s a deadly show. We’re driving around in oul Toyota Corollas, terrifying the whole of Greencastle and beyond. You get to see lovely parts of the country like the Crockanboy Road and Mullydoo, albeit with bits of brains and dead bodies scattered all over the place. It’s a very realistic setting.”

A BBC spokesman has poured cold water on the initial excitment by admitting that it’s highly unlikely to make it onto the TV schedule:

“It’s just not all that believable. One of the episodes is called ‘A Fierce Charge of Drink’ where the main cast just sit all day in Eddies drinking Guinness and debating about ‘headin to Clones in the morning’. Then a group of girls from KIldress come in at about 11pm and they just start slagging each other about ‘tackling the one that looks like a cabbage’. I can’t see it being a big hit in London or New York to be honest.”