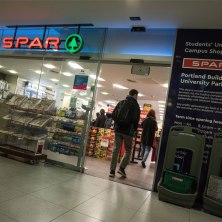 A Cookstown welder has decided to run the gauntlet one more time after buying his wife her entire Christmas gift in the local Spar despite being warned not to by friends and family.

Phillipe Mulligan, who was banished to his brother’s house at 10am last Christmas after his wife unwrapped three packets of Spar paracetemol tablets and a box of Lemsips, was witnessed browsing the razor and shaving cream section intently this morning before settling for a Gillette Fusion Facial Combo and a roll of wrapping paper.

Despite pleads from the cashier, who happened to be a third cousin of Mrs Mulligan, Phillipe completed the transaction, muttering something about hoping she ‘takes the positives out of it’.

“That’ll be four years running he has just dandered to the Spar. The first time he bought a three-pack of cooked ham and pink Lucozade. The man’s head isn’t right.”

Meanwhile, three men shopping in Woolworths in Dungannon were rescued by the Fire Brigade after getting stuck in the women’s Aran jumper aisle. Although two recovered in the back of the ambulance, a Castlecaulfield man was still on a drip this evening. 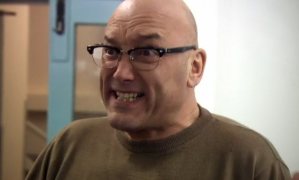 Not a fan of corned beef in buttery soda bread

The much-anticipated ‘Masterchef Tyrone’ has been shelved after only three episodes when presenters John Torode and Gregg Wallace refused to taste one more bite from the county’s hopeful culinary candidates.

The new regional series which saw contestants from Strabane, Killyclogher, Brackaville and Cookstown will now not air as promised and has instead been cut up and edited for special episodes of blooper shows such as You’ve Been Framed and It’ll Be Alright On The Night.

Camerawoman on the set and former Miss Castlecaulfield 1988 Jenny Robinson explained the decision:

“I agreed with the presenters. The stuff was inedible. In the third series they were asked to make their signature dish and yer man from Strabane opened an old tin of corned beef, didn’t scrape off the fat, and stuck it between two lumps of soda bread smothered in butter. He added a few bits of grass for effect around the plate and told the two experts to ‘get yer gob around that’. Gregg Wallace, who has an enormous appetite, threw up on the first chew.”

Brackaville man Mick Rea was disgusted at the hasty decision:

“This is nearly a form of racism. Just because they don’t like our food they pull the plug. For my signature I made sausages inside a coat of bacon, smothered in a drippy but lightly fried egg with lashing of salt. As a side dish I chopped up some Love Hearts and melted a Snickers to give the plate a chocolatty sophisticated design. If I made that in Brackaville I’d be kicked around the golf course for being a snobby oul hoor. But not good enough for these two BBC lads. Discrimination.”

BBC defended the decision after revealing their two presenters were suffering from severe stomach cramps from the previous episode when Killyclogher’s Jennifer Grugan surprised the experts by misreading ‘crab pie’ as ‘crap pie’. That episode has been destroyed. 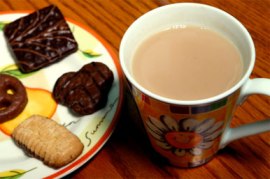 The worrying problem of pensioner biscuit addiction worsened yesterday in the County when three octogenarians from Cappagh were arrested for manufacturing substitute custard creams and trying to sell them in the Pomeroy Diamond. It is believed that the pensioners were trying to make home-made biscuits using custard powder, milk and two small rectangular pieces of cardboard.

“The price of custard creams is now up to 75p for 400 grams, and that has created a thriving black market” said Chief Inspector John Quinn of the PSNI, which has set up a dedicated ‘Custard Cream Team’ to deal with the problem. “The addiction is a growing problem in Tyrone. Walk round Stewartstown on a Saturday morning and you can hardly move for the used teabags lying about. It’s disgusting. People are scared of going out of their house for fear of being accosted by a wrinkly pestering them for a ‘couple of biccies’. The street price for sandwich biscuits has gone crazy, with a single chocolate bourbon costing as much as 7 pence on some street corners in East Tyrone”.

Quinn also warned of a growing scam across the County, “where pensioners ask if they can ‘just pop in for a wee cup of tae in ma hand’ and as soon as the unwitting neighbour’s back is turned they’re getting tore into the biscuit box like a demon possessed”.

“I started experimenting with biscuits when I got into my 70s” said Kitty Clarke, a biscuit taker from Cabragh. “At first I just took them recreationally when I was down the Killeeshil Community Centre on a Wednesday morning at the sewing bee, maybe the odd fig roll or malted milk. But by the time I was 75 I was into the heavy stuff like chocolate bourbons, custard creams, even jammy dodgers. They say crystal meth rots your teeth? Try troughing your way through six packets if iced gems without so much as a cup of tea. I feel so ashamed. Last week I got into a fight with old Tommy Crawford from Castlecaulfield, because I had got hold of his ginger nuts and wouldn’t let go. We’re fine now, but only because he insisted I gave him a chocolate finger”.

In a desperate effort to curb the problem Dungannon Hospital has started administering substitute custard creams in the form of garibaldis and digestives. The hospital also has a detox programme, gradually weaning the pensioners onto hobnobs, to rich tea biscuits and finally onto a plain piece of Ryvita bread.

Readers affected by this article should contact any branch of Biscuits Anonymous.

Tyrone To Sell Off Castlecaulfield 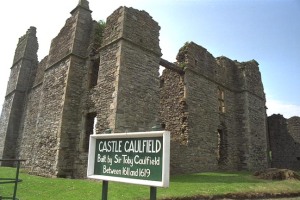 The Tyrone Council sparked outrage in parts of the county today when they announced they are to sell off Castlecaulfield to the highest bidder in an attempt to ‘make a bit of money’. The news came as a shock to the inhabitants of the sleepy Tyrone village who were still celebrating their joint third place in the 2011 Ulster in Bloom competition, beaten only by Keady and Swatragh. In a statement released this morning, the Tyrone Council’s Petsey McCann explained the decision:

“People don’t realise who much money it costs to keep Tyrone in the manner they’re accustomed to. They look around and think it’s a great place altogether. Well, we’ve news for them. It doesn’t buckin keep itself. When everyone’s in bed we’re out mowing hedges in Galbally, removing cow clap from the roads in Derrytresk and painting over teenage graffiti in Omagh. The diesel money alone is crucifying us. The red stuff isn’t as cheap as it was and running the engine on cooking oil was attracting large rodents like badgers after dark. One of our volunteers was attacked by a mink in Creenagh. We had to sell a bit to make ends meet and sure some people think Castlecaulfield is a mythical place like hell.”

Residents in Castlecaulfield see it differently. One local, Mary Rankin, told us she wasn’t surprised about the decision.

“Ah holy Jaysus. It’s come to this, has it? I knew those shower a bastards would sell us off. There’s been no Interent here since 2010. They’ve been trying to break us for years and now they’ve taken the cowardly way out. Well, I can tell you this. We’re not going down without a fight. I don’t care if the Vatican buys us. There will be blood! I’ll bate the bollocks clean off any foreigner who thinks he owns me.”

McCann intimated that there has been a few interested buyers already with McDonalds, Louis Walsh, Big Tom, Richard Branson, Rich Tea Biscuits and Sean Quinn mentioned as potential purchasers. All Castlecaulfield members of the Tyrone GAA county teams at every level were told not to show their face again at training, whilst election voting privileges were withdrawn. The word Castlecaulfield has also been outlawed.