A long-suffering Armagh wife as decided to strike while the iron is hot and highlight the ‘typical Tyronisms’ she’d had to put up with since marrying her Moy husband in 1995.

Conor Mackers (45) has been accused of cynically ironing and making dinner whilst indulging in verbals with his children before school every morning. Mrs Mackers also claimed her husband would throw himself to the ground when out walking and then blame her for pushing him.

“There’d be days he’s ironing my blouses and he’s deliberately and cynically burning tassels or sleeves. You’d see him smirking after. Then when he’s asking the children about school during breakfast he’s start sledging them about how crap they are at the writing or sums. He’s a modern Tyrone man to the core and not the man I thought I’d married back in ’95.”

Mrs Mackers revealed how he deliberately tripped himself queueing up for Communion and then blamed it on a man from Maghery who was three down from him.

“It’s getting worse. This morning he was pulling on his own shirt over his head and then started grappling with himself, ripping his own shirt off again and finally flung himself to the floor. If that wasn’t bad enough he began slagging himself. It’s very inconvenient when we’re in a rush.”

Conor Mackers has played down the allegations and asked the public not to be sucked in by the one-sided allegations, adding ‘it takes two to tango’.

Meanwhile the Moy’s ‘Sledging and Slagging Competition’ has received over 400 applications this year with reigning champion Ainsley Coney from Ardboe favourite to retain his title.

Roy Keane Walks Out Of Mass Before Prayers Of The Faithful

Following his high-profile departures from various soccer teams as a player or manager, as well as some media outlets, Roy Keane has added the 10am Mass at St Malachy’s in Woodbridge to his quitting list, labelling the Tyrone born priest Fr Quinn ‘a clown’.

Worshippers who sat near Keane during the service claim to have heard him muttering stuff throughout the readings and throw piercing stares at a 13-year old boy who sneezed three times during the Gospel.

Daily mass-goer Harold Burkin, who normally sits behind Keane on a Sunday, maintained the warning signs were there from the opening Introductory Rites:

“His stubble was unusually haggard and he had that deep furrowed brow look from the moment he knelt down for a few pre-mass prayers as he normally does. Two women were whispering away about last night’s X-Factor to his left and I heard him muttering something about the ‘blue-rinse brigade’ and ‘a pack of feckin donuts’. I knew something was going to blow.”

Keane appears to have walked out just after the Sign of Peace which involves worshippers shaking hands with anyone sitting close to them. Fr Quinn, who originally hails from Plumbridge in Co Tyrone, decided to shake hands with the first five rows as it was the first Sunday of Advent:

“He just stared at me but I continued to hold out my hand. But then he said ‘how are you in effing close proximity to me you effing clown – get back on your pulpit and do your job, clampit’. I admit I was sort of shaken by the incident and made a few mistakes thereafter. I’d completely forgot about the Prayers of the Faithful earlier and so tried to squeeze them in before Communion.’

Members of the congregation maintain Keane soon got up and mumbled something about ‘a bunch of amateurs’ and used the ‘effin clown’ words again. 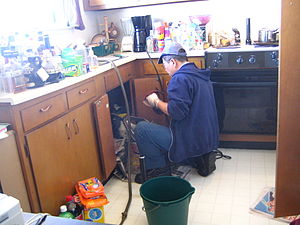 Doctors at Omagh Hospital were hopeful that Tattyreagh plumber Kenny Dorris will make a full recovery after a domestic spat left the 45 year old needing emergency surgery. Details are still sketchy although all sources confirmed that Mary Dorris exacted revenge on her husband after one flirtatious incident too many. Kenny’s brother Harry was quick to fill in the gaps to our regional reporter:

“Ach our Kenny’s a wile one for the wemen. The same boy would chat up a group of nuns if he was in the form for it. I know Mary had been pissed off with the way he was winking at the blades whilst giving out communion. There’d also been rumours of him plumbing at houses that didn’t need any plumbing. I know surely what kind of plumbing he was at, the dirty bastard.”

As far as we can tell, after one wink too many, Mary waited until Kenny fell asleep last night after he had consumed his nightly quota of eight bottles of stout and a couple of Powers chasers. She seemingly poured superglue over his left hand and placed the same limb over his own privates. Neighbour Jenna Carpenter heard the screams:

“I never heard yelping like it. Being semi-detached ye’d hear them two rowing into the night. This was different. I think poor Kenny got up to go to the toilet at about 8am only to find out that his hand was attached to his balls. Ye shoulda heard the language. It was ‘stupid feckin crazy hoor of a cow’ this and ‘I’ll buckin haunt ye ye bitch’ that. The language was rough now. She was giving as good as she got, calling him all the tramps of the day. Ach to be honest I felt sorry for Big Kenny. He’d always been good to me. Any time I’d need any plumbing he’d be around in a shot. Handsome man too.’

Doctors confirmed they had received a patient with his hand attached to his testicles but reckoned they could separate the two easily enough. They did admit, though, that if the surgery was unsuccessful he’d have to get used to standing like that around Tattyreagh.