A controversial insight into the daily lives of East Tyrone women married to Loughshore fishermen is to be screened over the summer, with some critics predicting it will become the greatest TV series since Dallas in the 1980s.

Details on the Desperate Fishwives plot have been hard to come by with BBC officials remaining tight-lipped about the project, instead releasing information on some of the main characters who may become immediate superstars such as Sue-Ellen and Miss Ellie.

Crystal is a 36-year-old red-haired ex-PSNI officer married to Bob McCourt, a 600 eel-a-day fisherman. Crystal, bored as Bob spends 20 hrs a day on Lough Neagh fishing and blathering, takes a notion to the local priest who in return hears her confession 4 times a day. Crystal tries to gain acceptance into the local community despite her shady past as an Armagh woman.

Pamela-Jane (39), who won the 1998 Ardboe Miss Wrangler Jeans competition at sports day, is married to Rob Coney – the captain of the Rams Island trout-fishing boat. Mrs Coney spends her days running a massage parlour in Moortown, frequented by many well-known local celebs such as Malachi Cush, Paddy Heaney and Philip Jordan who often leave smiling a lot.

Francine (23) causes consternation when she weds 81-year old Patsy Quinn, the millionaire ‘King of the Salmon’ fishing businessman. Francine fills her hours walking around the Washingbay winking at young men and dressed in long frocks and sparkling jewellery.

“The show follows six fishwives about for 12 months. We encounter fighting, diffing, slapping, cousin-fancying, fishing, crying, laughing, drinking and punching as the women meet up once a week. This will create serious tourism for the area.”

The first episode is to be aired June 31st at 8pm. 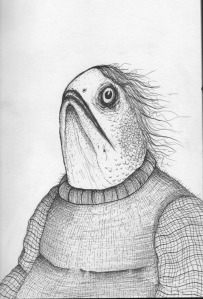 An eminent Coalisland doctor has revealed blood tests confirm that up to 100 Derrytresk folk have started to show fish-like characteristics such as scaliness, excess pouting as well as casually eating worms and maggots.

The latest developments follow on from a nightmare fortnight for the beleaguered East Tyrone residents, after over 9 feet of rain fell every day since November 20th. Sightings of blue whales and cruise ships have yet to be confirmed as a 4 mile radius remains underwater today.

Local historian and cultural enthusiast Mr E Campbell admitted there has definitely been a shape-shift amongst residents of the general Derrytresk area since the recent bout of exceptionally heavy rain.

“There has been a visible change this time alright. I think our DNA down here has been gradually warped with the continuous retention of surface water, and the doctor’s tests confirmed we are almost mermaids and whatever the male equivalent of that is. You see people flapping about all the time now.”

Dr McKinney, who has been treating Derrytreskonians since 1956, is adamant that there’s no stopping the recent developments:

“I’ve always said the Derrytresk ones were cold-blooded and slippery in the metaphorical sense. But now it’s literally and physically true. I had a Hill woman in last week and she started pouting like mad. I thought it was some kind of romantic manoeuvre so I pretended to be sick myself and got rid of her.”

Meanwhile, the Lough Neagh Conservation Group have warned Asian tourists that they will shoot on sight anyone attempting to sail into Coalisland from Liverpool via the Bann, Lough Neagh and the newly formed Derrytresk Waterway.

The prolonged flooding of fields and roads in East Tyrone has resulted in many residents gradually adopting fish-like characteristics such as having pouted lips and being deadly slippery.

Scientists have descended upon the area hoping to find definite signs of aquatic change, investigating a woman from Derrylaughan who has reportedly developed scaly leg syndrome. Professor Herbie McMahon, whose mother originates from Moy, is excited by the prospect:

“Yes, this is class news. I remember the bad floods in Derrytresk four years ago and I personally believe if it hadn’t dried out so soon back then we would have witnessed a whole batch of mermaids and mermen slapping about in that general area. I spent three days hiding in hedges and loanans watching them evolve from normal Derrytreskionians to half-man/half-salmon beings. The women too were pouting like mad and sucking in air, developing those trout-pouts celebrities pay for. One girl started eating worms. No one believes me though.”

Recently, the floods have shown signs of drying up with many fields below the M1 Tamnamore roundabout down to under 8 inches water depth. Prof McMahon insisted time is of the essence:

“We need to act now. There’ll be a few showers this week which will keep these people topped up. I’m told there’s a man developing gills in Brocagh. I also took a spin out to Ardboe this morning to watch the locals return from mass. Parishioners were flapping about all over the road and jumping in and out of streams. Ardboe ones would be slippery enough by nature but this is something else.”

The physical changes have come at a cost though as the predominantly fish-eating locals have begun eyeing each other up and licking their lips at one another whilst making threatening pot-stirring gestures.