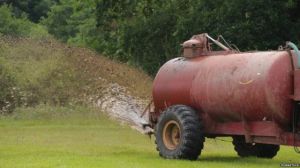 Despite fears from local residents,the plant which will see slurry and silage used to generate electricity near Coalisland will be kick-started by over 300 tonnes of articles penned by Joe Brolly as well as transcriptions from his TV appearances before enough slurry can be collected.

The proposal will see a 500KW digester that will take 10,950 tonnes of silage and 1,450 tonnes of slurry a year. Local scientist Paddy Quinn maintains Joe’s words will have a similar effect as that produced by animal waste:

“We tested over 300 products but the one which shone brightest was Joe Brolly’s thoughts, even more so than Donald Trump’s, Katie Hopkins’ or David Cameron’s. It’s quite remarkable and another string to this incredible fellow’s bow. A 3-minute transcript of a Brolly speech produces the same electricity as 40 tonnes of slurry.”

The development at Ballynakelly will generate enough electricity to power 500 homes and help Northern Ireland meet its renewable energy targets.

The Concerned Residents Committee have urged local politicians to oppose the idea, especially now that the waft of the Dungiven man’s words will fill the air for the first few weeks. In a statement they added:

“The slurry and the silage is bad enough but Brolly’s thoughts are something we’re not prepared to digest, in more ways than one.”

Meanwhile, the PSNI crime prevention team have reminded locals that the new source of electricity should not be used for generators powering outhouses for illegal poitin-making operations or the like.