Inspired by scene from balconies in Italy, a Plumbridge tree surgeon was cut down in his tracks by angry neighbours after trying to sing ‘Wagon Wheel’ to cheer people up.

Scenes soon deteriorated as more neighbours came out to tell the other neighbours to shut up themselves. Within 20 mins, police were called to the village as over 200 people were shouting bad words at each other to the backdrop of an out-of-tune Wagon Wheel.

Jackie Coyle (46) admitted he was overwhelmed with emotion when he witnessed various Italian communities come together in song and music and thought it would do The Plum good to try the same.

“I didn’t think I’d have received the reaction I did. I had hardly finished ‘Rock Me Mama’ when someone shouted ‘shut the f**k up’ and fired what looked like a tricycle in my direction. Soon he was joined by others as I continued to sing. Then loads came out to tell the first crowd to shut up, only using worse language”.

Coyle maintains that he will be undeterred and promises to do a rendition of Johnny Logan’s ‘What’s Another Year?’ on Easter Sunday but will wear protective clothing such as a helmet and some kind of body shield. 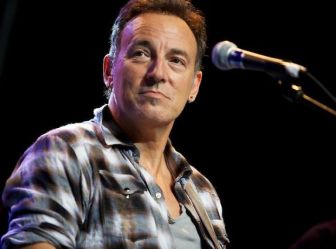 Despite almost universal critical acclaim after his two concerts in Dublin at the weekend, Bruce Springsteen was said to be reeling after it emerged a group of Dungannon country and western fans were left unimpressed by the American singer, lamenting his decision not to even attempt Wagon Wheel and for ignoring their placards and pleas to sing ‘If Tomorrow Never Comes’.

Springsteen (66), who played for over three hours during both concerts, wooed 150’000 fans with renditions of classics such as ‘Born in the USA’, ‘Born To Run’ and ‘Dancing in the Dark’ but it was the songs he left out which annoyed music fanatics in Dungannon.

“We spent a fortune buying massive fake wagon wheel biscuits, stetsons and cowboy boots…and all for what? All he sang about were rivers and glory days and the USA. Not even a line from Wagon Wheel or Blanket on the Ground. People say he’s a great performer but you’re only as good as your ability to sing these classics and, in my opinion, Springsteen ducked it.”

Doris’ best friend Jackie Quinn went as far as asking for a refund:

“Even after two hours I still hoped he could stop with the crap and sing a few bonafide country and western tunes. But he copped out of it. I’ll be writing to Springsteen to ask for my money back. Even The Gambler would have done. But he kept harping on about the promised land and factories and sticking it to the man. Rock Me Mama was never happening.”

The 8-strong Dungannon posse staged a mass walk out at 10pm after which Springsteen sarcastically broke into a couple of bars of Margo’s ‘Dust on Mother’s Bible’.

A Clady man determined to make it big in the pop charts was left bitterly disappointed on Sunday when his debut single narrowly missed out making it into the top 10,000. 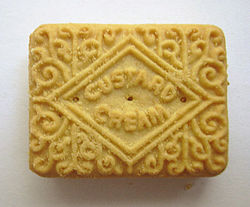 “It came to me all of a sudden when I was having my tae one day”, explained Hughes. “Why should the Carter cub have it all his own way with songs about chocolate biscuits? Can’t say I’ve listened to his record all the way through, but I’ve heard enough to know that if he can make a buckin’ fortune singing about Wagon Wheels, then I should be able to do the same with Custard Creams. And at least Custard Creams haven’t got smaller in size over the years. Bet young Carter doesn’t mention that inconvenient truth in his fancy song, eh?”

Hughes’ initial song-writing started out with an early effort entitled, ‘Terry’s Chocolate Orange’, but immediately encountered rhyming difficulties. He fared much better with Custard Cream, but fails to understand its lack of radio success, commercial success, critical success, or in fact any type of success whatsoever.

The song, which several observers have accused of bearing a suspicious likeness to Wagon Wheel, goes,

The song continues in a similar theme,

You can go to paradise just eating one wee Custard Cream

Shop around to buy me use some shopper’s common sense

Rumours surfaced late yesterday from a source in Strabane that Hugo Duncan has blacklisted the song on account of being a Garibaldi fan. 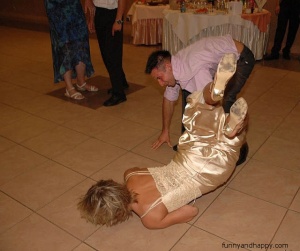 Hospital authorities across the county have issued a plea to Tyrone residents to ‘calm down a bit’ on the dancing, as a four-fold increase in ‘jiving-related injuries’ put hospital services at breaking point at the weekend.

It is thought that the increasing popularity of local singers such as Nathan Carter, Derek Ryan and Lisa McHugh, combined with the forthcoming Garth Crooks concerts, have thrown residents into a frenzy of what many have euphemistically referred to as ‘dancing’.

“We’re on high alert”, admitted hospital doctor Sheila Quinn from Edendork. “It’s like a bizarre but very worrying form of hypnosis, particularly in some of the men. Put on ten seconds of ‘Wagon Wheel’, and suddenly they’re thirty years younger and John Travolta. You should see them. At best it’s 250 quid off of ‘You’ve Been Framed’ and at worse a 10-day spell in traction. Have they no sense? What makes them think that if their hips are clicking one minute, they can do a back flip the next? Holy Smokes”.

Crisis point was reached following the announcement of the Garth Brooks tour dates.

“Since then, we’re just swamped with injuries”, said Quinn. “Last Friday night we had admissions of a whole lock of different accidents at pubs and clubs, from dislocated wrists to sprained backs, locked knees, and broken ankles. And that’s just from people getting out of their stools. The actual jiving injuries were even worse”.

Authorities now fear that the outbreak has spread to domestic premises.

“We’re getting more and more call-outs to people’s homes”, admitted paramedic Aiden Mullan from Trillick. “We got an emergency call to Urney last Thursday and were treating this one boy for convulsions. Turns out that was just him tryin’ to throw some shapes to ‘Friends in Low Places’. Jaysus, we thought he had swallowed his tongue. And then on Sunday, this one in Seskinore had grabbed his missus after Sunday lunch when ‘Cotton Eyed Joe’ came on the radio. He tried to spin her round and ended up catapulting her straight through the conservatory window. Poor woman. We were picking glass out of her arse for hours”.

Hospital authorities have confirmed that they are to remain on high alert throughout spring or ‘until people wise up’. Meantime, radio broadcasters have been cautioned against ‘inciting people to jive’, with Hugo Duncan having already received a formal reprimand for deliberately playing ‘Achy Breaky Heart’ without a health warning. 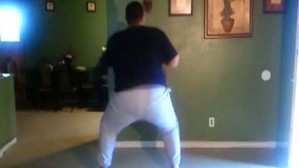 A multi-denominational approach has seen all religious leaders denounce twerking from their pulpits this morning and warned that any youngsters or middle-aged boogie lovers caught arse-dancing after 8pm in discos and dance halls will be excommunicated from their respective churches.

Arse-dancing involves shaking your behind to all types of music, popularised by Americans such as Beyoncé and Miley Cyrus. Fr Simon Shields, the 55 year old PP of Cappagh Parish, highlighted the dangers of such dancing:

“Us priests and other faith leaders still like to head to the odd disco and enjoy the modern music and clap along. The last thing we need is seeing these dance floors filled with a mass of arses bouncing all over the place to Nathan Carter’s Wagon Wheel or the latest Bangles number. It’s putting us priests off and we’ll end up not going and getting grumpier. It has to stop so we’ve banned this type of dancing for the next two years everywhere in the country from the Glenavon to Sally’s. No more twerking in Tyrone”.

“Let’s be honest here. Tyrone wouldn’t be a deadly place for arses. I’ve seen hefty men and women in tight leggings bouncing their backsides like as if they’re standing in a trailer on the back of a Massey motoring down a bumpy back road in Greencastle. It’s nauseous for us oul lads. What’s wrong with a good old fashioned waltz or jive?”

Already, one Church of Ireland service goer has been reported by her husband for arse-dancing whilst making the dinner in Aghyaran although she was simply verbally reprimanded by the furious vicar as she beat the 8pm watershed.

Churches as also looking into banning the ‘Rock-the-Boat’ rowing dance as well as Nathan Carter himself.