Inspired by scene from balconies in Italy, a Plumbridge tree surgeon was cut down in his tracks by angry neighbours after trying to sing ‘Wagon Wheel’ to cheer people up.

Scenes soon deteriorated as more neighbours came out to tell the other neighbours to shut up themselves. Within 20 mins, police were called to the village as over 200 people were shouting bad words at each other to the backdrop of an out-of-tune Wagon Wheel.

Jackie Coyle (46) admitted he was overwhelmed with emotion when he witnessed various Italian communities come together in song and music and thought it would do The Plum good to try the same.

“I didn’t think I’d have received the reaction I did. I had hardly finished ‘Rock Me Mama’ when someone shouted ‘shut the f**k up’ and fired what looked like a tricycle in my direction. Soon he was joined by others as I continued to sing. Then loads came out to tell the first crowd to shut up, only using worse language”.

Coyle maintains that he will be undeterred and promises to do a rendition of Johnny Logan’s ‘What’s Another Year?’ on Easter Sunday but will wear protective clothing such as a helmet and some kind of body shield.

Ireland Might Be ‘Put Down’ After Gaza Vote Says Tyrone Psychologist

Following Ireland’s decision to abstain from a UN Human Rights Council vote on whether to launch a commission of inquiry into Israel’s offensive in Gaza, a Carrickmore medical expert has hinted that Ireland may be in the advance stages of dotage now with eye-sight almost entirely gone and left vulnerable to bullies.

The diagnosis was forwarded by fax to the Head of Medical Practices in Dublin with a recommendation that the nation be ‘put down’ before it comes out with something that’ll embarrass us for centuries, hurting tourism and overseas sales of Tayto and Guinness:

“If Ireland was a dog….well you know the rest,” Dr Henry McCallan informed us by, again, fax. “It’s obvious that its eyesight is so completely banjaxed that it cannot distinguish between extreme violation of human rights from a bit of ‘carry on out there’ as one politician told me yesterday.”

The doctor was also worried about Ireland being taken advantage of by younger and cleverer nations who promise to cure her of all her ails if Sean-Bhean Bhocht plays ball with her:

“Yes, that’s a big worry. Kathleen Ni Houlihan appears to be in a vulnerable state and will jump as high as she’s told. I’m aware of a particular young, devious and powerful predator out west who was been promising her all manner of treasures as long as she toes the line. I think we need to put her out of her misery before we’re stripped of all respectability. She’s undoing all her good work such as The Book of Kells, WB Yeats and Johnny Logan.”

The move to put her to sleep follows other examples of irrational behaviour in recent times such as appointing Roy Keane in a role of responsibility and making a cod out of a C&W singer.

Scientists last night were said to be dumbfounded and bedazzled at the discovery of old mobile phones at a dig in the area, dating right back to the 1960s.

Authorities were notified about possible important fossils after diggers at a new site on the town came across a pile of massive mobile phones wrapped up in toilet tissue paper. On further inspection, it appears that these mobiles pre-dated the iphone and other smart phones by at least 40 years going by some of the text messages discovered on them.

One such message dates back to the 1969 moon landing and hints at the scepticism around Stewartstown at the time:

“This is quite remarkable. It appears that the residents of Stewartstown had invented messaging capabilities long before the superpowers across the globe. Going by the finds, it appears they were using BT as a service provider by hooking up one big phone to an electricity pole as a generator. “

Other examples show a timeline of life in the 80s and 90s in Stewartstown: 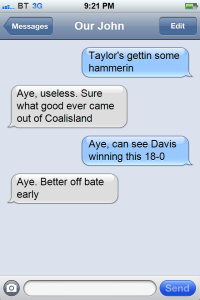 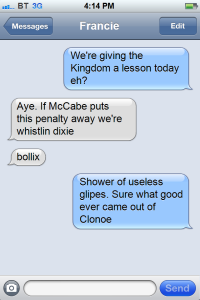 Local historian Kitty Fee was coy on the finds:

“Yes I was aware we were ahead of the game at the time. But, it’s something we don’t want dug up, ok? In 1999 we took a decision to destroy all these phones after sexting became rife in the town. Men and women were sending dirty pictures to each other at all hours and the priest was going mad and said he was going to excommunicate us all. It had to stop. Now, move on.”

One of our journalists was able to leak another text to the office which throws light on the sexting debacle that threatened to destabilise the town: