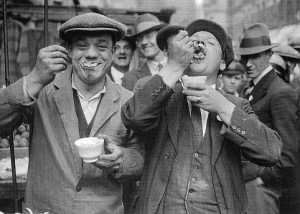 Thousands of caps ready to be unleashed on Brackaville

The sprawling village of Stewartstown, where no one has emigrated from or immigrated to since 1979, has decided to flex its international muscle and issue a sort-of nuclear threat to the rest of the world that they’ll be ‘taking no more shit’ from today onwards. Unfortunately nicknamed ‘tintown’, after it was revealed in 1948 that labourers wrap everything in tinfoil from their lunch to their tools, residents have decided that now was the time to reveal the arsenal of weapons they have been stockpiling since 1969 when they struck up a deal with the Russians.

“Yes, that’s right lads and lassies. We’re the bucking big boys now. We have shedfuls of Spanish fireworks, caps for Chinese toy guns, French bangers and Brazilian sparklers. Buckets of the stuff. Underground bunkers, hideouts in rural areas – you name it. Let the message be loud and clear – one more online reference to tintown or any other derogatory reference to Stewartstown and this planet is going to experience the Armageddon. Starting with Portugal or New Zealand maybe. We might give Brackaville a rattle first, like as a test drive.”

Flanked by 7 men and 3 women all wearing welding masks as disguise, Coyle was asked what sparked the declaration of war on the world at this particular time:

“I was reading something on boards.ie yesterday regarding weeding lawns and someone said something about ‘Stewartstown a.k.a. Tintown’. That was the straw that broke the donkey’s back. Then there’s them North Koreans, the Pakistanis, the Yanks, the Russians, the Chinese and the Iranis all boasting away about their nuclear capabilities. Well, try counteracting 5000 loop-the-loop fireworks being dropped on you from about 1200 feet. One of our lads recently got a provisional pilot’s licence and we know we can hire a small 2-seater from Newtownards. Just push our buttons one more time. ONE MORE TIME.”

The UN have confirmed they are taking this threat seriously but will wait to see if it’s just a result of nerves before the Intermediate quarter final against Brackaville that has sparked today’s declaration.