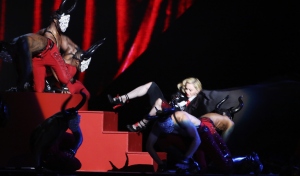 What started out as a harmless comment on Twitter concerning Madonna’s fall at an awards ceremony during the week has turned nasty with a clear West v East split emerging from the online spat.

“Holy smokes, Madonna fell there on the TV”

at 9:45 on Wednesday night. Within minutes, tension escalated quickly when Mary Farrell (@badgerlass) from Brocagh replied at 9:46:

@badgerlass How about you learn some manners, ye prick

Which led to the following dialogue:

@horseitintoye – Say it til my face ye slabber

@badgerlass –  Yiz are all the same down there. Tramps.

The high-stakes dialogue continued until after midnight with over 300 twitter users weighing in behind either Dougan or Farrell, with landmarks (e.g. Ardboe Cross v the Tin Men), footballers (e.g. Frank McGuigan v Ryan McMenamin), politicians (e.g.Michelle O’Neill v Barry McElduff) petrol prices and weather all used as weapons in the heated exchanges.

With no let up in the argument the following morning, and amidst threats of ‘arriving up with a crowd of our ones‘ from both sides, Twitter was moved to suspend over 700 accounts from the county for 24 hours in order to dampen emotions and calm the situation.

The Tyrone Tourism Board are to meet this evening to brainstorm ideas on how to repair east v west relations, with a ‘sharing and exchange of home-made gifts’ somewhere near the Ballygawley roundabout the firm favourite.

Tensions are running high tonight in Ballinderry after a leaked document from the ‘maps department’ at Stormont indicates that Ballinderry will now be considered wholly in Tyrone, starting from August 1st, after a re-alignment of the Ballinderry River.

The Ballinderry parish has long straddled the Tyrone border with the sizeable Ballylifford village until now claimed as being on the Derry side with Derrychrin, a much more civilised community, on the Tyrone side. The Ballinderry River was seen as the natural geographical border but that is about to change with the proposed new route for the river. A Tyrone county council spokesman told us:

“If the rumours are true, then this is class news. Everyone knows that the best looking women at the Greenvale come from the Derry side of the river. Our parents didn’t allow us to fraternize with them for obvious reasons. More importantly, Ballinderry’s All-Ireland title in 2002 is now on our records. We will be parading that team around Omagh tomorrow week. I also believe they won 12 Derry titles. Those sides will now play our champions for that same year. The 1927 fixture will be hard to fix up against Donaghmore Eire ogs.”

Not all welcomed the news with such good humour. An elderly local, named simply as “McGuckin”, reacted angrily:

“Balls to this. We won’t go down without a fight. We used to bate the shite out of them Moortown and Ardboe ones on the field. We’ll do the same on our doorsteps when they come for us. We’ll lay waste to the land as a last resort. There’s no way I’m shouting for the red arses next year. Yiz can take Derrychrin but we’ll be Oak Leafers til the deathbed.”

The PSNI have issued a warning to anyone resisting the swtichover that they will be dealt with severely. On August 2nd, houses north of the river will be searched and any pictures of Dana, Seamus Heaney, Henry Downey, Enda Muldoon or Conleith Gilligan will be destroyed. Small statues of Frank McGuigan and Chris Lawn have been sent to all households in the present Derry region of the parish to help them acclimatise to the new changes. The whole of Lissan might be given to Derry as a thank you.