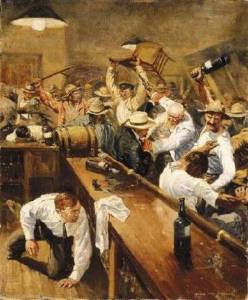 The organizers of a Cookstown Pub Quiz have admitted that strict regulations on mobile phone technology may have been a reason for the violent scenes witnessed during last night’s Monday Night Quiz in Mullavan’s Pub.

Police were called to the venue at 11pm after three windows were smashed and furniture broken following a tie-break question, which caused a difference of opinion, to see who would finish in last place.

The question – ‘Which world war came first – World War I or World War II?’ saw The Sinister Pumpkins answer WWI with Badger Breeders adamant it was WWII. The Quiz Master awarded the points to Badger Breeders, sparking an aggressive debate and accusations of underhand tactics before a glass was thrown at a supporter of the winning team. Within minutes an all-out brawl engulfed the premises.

Paul O’Farrell, captain of The Sinister Pumpkins, told us from his bed:

“This was blatant favoritism. Everyone knows that WWI was first – there should be no debate about this. That’s why it’s called One and not Two. I can’t believe we even had this discussion, never mind a brawl.”

“If you invented a time machine and started traveling back in time, then you would encounter WWII first as it is most recent to us. It makes sense to me. The whole wording of it is a side issue. Sure didn’t The Hobbit movies come out after The Lord of the Rings movies and that’s all messed up when you think about it. Same with Star Wars – the prequel one which came out after the first ones in the picture-houses which were actually earlier chronologically. And who’s to say Jaws 3 didn’t happened before Jaws 2, in real life like.”

Pub owner Eoin Mullavan admits a simple Google search on someone’s phone would have solved the dispute but a strict policy on technological devices prevented their use. He added that he personally believes WWII was first but would surf the answer later.