← What You Type In To Google To Find Tyrone Tribulations…..
Rise In Women Fixing Their Hair Before Answering The Phone And Wearing Tabards →

Tickets have gone on sale for an unofficial music festival to be held in one of Tyrone’s premier beauty spots.

‘T in the Parkanaur’ in the brainchild of Gerard Donnelly from Dungannon, who decided to stage the event after hearing of the rapid success of loom bands with young people and spotting a gap in the market.

“Jays, they’re mad for the loom bands, so they are”, said Donnelly. “It’s all I ever hear about. But you never hear of loom bands playing many gigs, do you?” he challenged. “Maybe they’re just shy wee craters. Anyway, that’s why we’re doing this music festival. The cubs’ll go mental for the loom bands. The public gets what the public wants, so they do”.

“And it’s not just the loom bands. There’s others too. We’re going to get Eminem as long as he promises to cut out the swearin, and Miley Cyrus, although to be honest I preferred her dad. And we’ve got one of the biggest Irish superstars you can think of. The biggest. Guaranteed. I can’t tell you who it is but let’s just say if she comes along she might just need to lay a blanket on the ground”, he said with a wink. “But honestly”, he went on. “She will need to bring a blanket. The facilities are going to be a bit limited”. 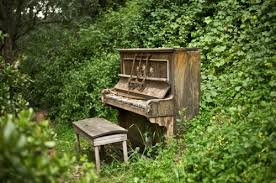 Controversially, Donnelly confirmed that the ‘T’ in the title doesn’t stand for Tennents, who sponsor of the hugely popular annual ‘T in the Park’ event, based in Scotland.

“No, I spoke to them but they weren’t interested”, said Donnelly. “Not in touch with the young ‘uns,see? No, the T stands for Toilet. Never enough bogs at these music festivals. We’re going to have hundreds of them wee cubicles. If we didn’t we’d have to call it ‘P in the Park’. Get it?! Ye boy ye!”

Asked about the parking, the catering, or if in fact permission had even been sought from Parkanaur, Donnelly was evasive.

“That’s all work in progress. These things take time. Let’s just say there are a few wee things to iron out. Listen, everyone was mitherin’ about it going maybe going tits up with the Garth Brooks concerts in Dublin, and it all ended up fine, didn’t it?

“Honestly, there’s nothing to worry about. There’ll be no stopping us. Not once we get started”.

← What You Type In To Google To Find Tyrone Tribulations…..
Rise In Women Fixing Their Hair Before Answering The Phone And Wearing Tabards →