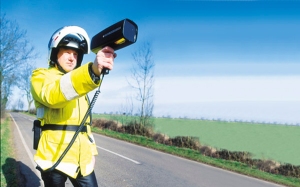 Local Spy Sean McGrinny has contacted the papers to complain that several times in the last week he has noticed police cars doing way above the speed limit, even in built up areas.

“I’ve no idea what they’re up to but I’m sure it’s no good” Sean began.

“On Monday I was feeling totally scundered after the Kerry match so when one of their cars speeded past me I succumbed to an irrational urge to give chase only to find myself flagged down, pulled over, and questioned by the very same policemen that I was investigating.

Later that night I was explaining to my civilian friends in the pub that there’s absolutely no call for this reckless speeding when one of them suggested they could be heading to the scene of a crime in Armagh or Derry or somewhere like that.

I decided to subject this bizarre theory to a test and can now confirm categorically that there’s not a hate of truth in it for on Tuesday morning I made a hoax call reporting that a robbery was underway in Fintona.

I made the call when out walking on the Dublin Road in Omagh and guess what? I saw 2 police cars racing up the Dublin Road with their sirens blaring in the exact opposite direction to Fintona.

To add insult to injury a few hours later as I was sitting down to write up my notes on the episode two big hallions rapped on my door and started giving me jip about the phone call, insinuating that I was wasting police time.

My mind was still on Dublin and the class restaurants they have around Croke Park so I came up with a story that a cousin of mine in Fintona thought that a robbery was underway at the local Indian restaurant. I guessed that would get them off my back but didn’t they only phone their colleagues in Fintona and discovered I have no cousins there and nor is there an Indian restaurant”.

Sean’s wife says she’s baffled by the entire handlin and has suggested that if the constant police harassment doesn’t cease that her husband might look for a new career.

“Where will the people of Tyrone be then” she raged. “There’s no-one in Ireland who has done more research into aliens and ufos and stuff like that than my Sean. My message to the police is to grow up. But if you want Tyrone to be overrun by aliens then by all means continue what you’re doing”.