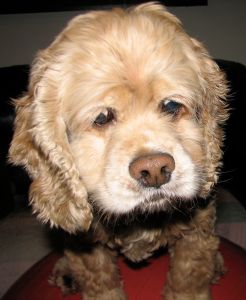 In the wake of a rash of monetary skulduggery following the DUP about in recent weeks, a fresh revelation has sparked astonishment and anger in equal amounts after it emerged a West Tyrone DUP member claimed over £42’000 in grants for their agitated dog who was suffering from depression after alleged intimidation from a republican dog in the Strabane area.

Billy Carson, who has owned the Jack Russell for two years, maintains it was money well spent after noticing his dog looked permanently worried soon after a Cocker Spaniel from a well known republican family reportedly stalked Carson’s pet for more than a year.

Carson, who refuses to return a penny of the counselling money, revealed:

“I noticed Edward was frowning incessantly one week and it dawned on me that Rebel the republican dog was intimidating it. Anyone who owns a dog knows how stressful that can be. I made use of my parliamentary privileges and applied for the Pet Intimidation Grant (PIG) which was a legitimate fund a couple of years ago. It doesn’t exist now though but it was definitely available in the small print back then.”

Receipts show that Edward the dog received acupuncture, massages, tablets, couch-therapy, sun-therapy and extra bones, totally £42’033 over the course of two years, all at the tax-payers’ expense.

Despite several counsellors repeatedly informing Carson that the dog was gay and that the lack of other gay dogs in the area was stressing it out, Carson continued to seek therapy for intimidation:

“My dog’s not gay. Who ever heard of a gay dog? And if he is gay he probably caught it off that republican dog.”

Meanwhile, Carson’s cat – Ian – also received counselling totalling £211 in 2011 supposedly for flashbacks from the troubles after it was caught up in a hoax bomb scare outside a barracks in 1987.

A common sight in Strabane?

A Strabane cyclist evaded jail after he claimed his dog cycled him to the shop with him on the dog’s back.

Dr Kenny Curley, a respected GP and avid cyclist, was questioned by police at 1am this morning after his local off-licence cashier reported him for being ‘blind drunk’ and ‘trying to pay for his items inside the cooling fridge’.

“He was rightly leathered, banging into walls and knocking over pyramids of beer. I noticed cuts and bruises all over his body and saw that his bike was banjaxed. It was when the doctor stepped into the fridge and tried to pay for his goods that I phoned the cops. I don’t know if he had rehearsed this but he told the policeman that his dog cycled the bike and that he climbed onto the dog’s back for the half-mile journey. And to give him credit, his dog was lying beside the bike, exhausted.”

Inspector McAuley was unable to prove the claim either way and let Dr Curley off with a stern warning that dogs probably shouldn’t be riding bikes even though it wasn’t in the Highway Code but also reminded him not to be piggybacking anyway. The inspector also demanded that McAuley walked home with his dog and cast doubt on the dog’s ability to reach the pedals but agreed to let him off this time. Dr McAuley proceeded to buy four cans of Coors.

The Drumnakilly Devil – The Truth

Or was it a man from Gortin?

I met a girl in Beragh and she said her name was Sarah,
And I thought she was as fair a lass as ever wore a shoe;
So I went and sat beside her, and with tay and buns supplied her,
And to soften her I tried her with a lozenger or two.

Researching the census back then, we can narrow it down to two Sarahs: Sarah Grimes and Sarah Rodgers. Beragh women were great for tea and buns and it was oft said that that combination usually had the females in the area weak at the knees. Lozengers would be a delicacy in Beragh even yet. This man was no pauper.

Nipping is an old Beragh custom between courting youngsters that still exists today. Usually around the age of 15, a Beragh father will sit down with his son and explain nipping. You only nipped a woman you were prepared to take a box in the face from. You never nipped big girls with strong arms. This rules out Sarah Grimes as she was a Feis arm-wrestling champion in 1923.

But she said it with a twinkle, and a brow without a twinkle,
And her laugh was like a tinkle that invited laughin’ back;
So I started to provoke her, and to hoke her and to poke her,
Till she vowed that I would choke her, and her stays began to crack.

It appears that the narrator was a bit of a nuisance and began poking away at young Rodgers who pretended to be rather affronted. Again, this was extremely civilized behaviour in Beragh, with the girl now being nipped and poked. All part of the mating process down there.

Says I, “Now don’t be silly, I’ve a farm in Drumnakilly,
And the more it may be hilly, there’s a handy bit of bog,
We’ll be happy there together with a bullock in the heather,
And the goat upon the tether and the donkey and the dog.”

This was the clincher for Rodgers. To be offered a farm, a bit of bog, a bullock, a goat, a donkey and a dog was like suggesting a diamond ring made from the most expensive gold in Ireland. There are Beragh women today who believe this was a made-up story like Cinderella or Mary Robinson such is their desire to be even offered a bullock.

Then it wasn’t long we tarried till the two of us were married,
And home the donkey carried us as the presents made a load,
And on them Sarah sittin’ with a clocker and a kitten,
As we jingled like a flittin’ up the Drumnakilly road.

The clocker may have been an instrument Beragh women were given back then to hit their men with if he continued to nip and poke after the initial courting phase. A rolling pin of its day.

But the night was getting chilly when we came to Drumnakilly,
I could hear the bleats of Lily as the graith came off the ass;
Says I, ” I’ll get a bucket, for I dunno how she stuck it.”
So I lifted wan and tuk it up to Lily in the grass.

The graith was a clamping device Beragh men put on their women’s backsides to prevent other suitors from pinching their arse. Even today, Beragh women who are engaged or married wear a graith under their jeans if they head into Omagh for the night.

Well, the goat was very willin’, and the bucket bravely fillin’,
But the milk was nearly spillin’ when I heered an awful squeal,
And then there came a clatter over stones and lyin’ water,
It was Sarah on the batter up the loanan to the field.

On the batter today means drinking heavily. It’s unlikely Sarah would have been necking poitin that early in the relationship. That usually came after the 5th child. Batter here meant roaring and shouting, like a normal housewife in Beragh. Beragh women are said to be the angriest females in Ireland due to the sheer laziness of the men.

She was leppin’ like a lion and her petticoats was flyin’,
She was roarin’, she was cryin’ fit to waken up the dead;
O she come without delayin’, and between the gowls and prayin’
I made out that she was sayin’, “John, the Divil’s in the bed!”

It is obvious here the narrator had a few rivals who were extremely jealous of the marriage. Many men dressed up as devils back then as it was said Beragh women were particularly fond of the dark arts, nipping, poking and being on the batter. Sarah seemed to have a man waiting for her in the bed as the narrator was out milking a goat. With her graith off, she was exposed.

I run in to see the Divil with a mind to spake him civil,
And behold ye Sarah’s Divil was a hairy oul buck goat,
With a smell for human noses that was anything but roses,
And a beard on him like Moses and a dickey at his throat.

The narrator appears to be either naive or unwilling to admit that there’s a good chance that he had his eye wiped just hours after being married. Gortin men were famous for their hairiness and Dickie-bows. Sarah Rodgers may have regretted her decision to turn a blind eye to the hairy devil and enjoy the moment whilst her hard-working husband was out milking the heavy goat, and ran out screaming a batter to make the whole thing look good. The bad smell confirms the man was from the Gortin/Plumbridge area where they ate a lot of wild garlic.

Says I, “Me neighbour Micky must have done it, for he’s tricky.”
But a goat that wears a dickey is a goat I can’t abide,
And because a man that smelled him would incline to do it seldom.
I cut the ropes that held him and I chased the buck outside.

Mickey McVeigh, the neighbour, was a bit of a ladies’ man but it’s unlikely it was Mickey. By this stage he’d been unintentionally castrated by a visiting freak show.

O sometimes me and Sarah dresses up and goes to Beragh,
But she’ll niver let me wear a dacent dickey like the rest,
And the thing that is uncivil is to mention Sarah’s Divil,
The Drumnakilly Divil with the dickey on his chest.

The marriage was a sham. There’s no doubt that the Gortin opportunist had a bit of success with Sarah in the 2-3 minute window he had. The poor narrator was not to speak of the incident again and dicky bows were a no-go area of conversation.