Evidence Of Tyrone Women ‘Doing Themselves Up’ For Obama Undeniable 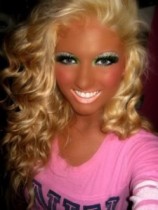 The county’s tanning salons and hairdressers have reported a 300% rise in bookings in the last month, finally confirming that Tyrone women are going that extra mile to look a bit better in case the American president sees them on a random spin around the roads. Excitement amongst Red Hand women has reached fever pitch with many husbands and boyfriends complaining about their partners being ‘a right bit distracted’ over the last few weeks with the arrival of President Obama imminent for the G8 summit in Fermanagh. Mary’s Salon in The Rock explained the extent of the grooming:

“It’s been deadly. I’d say about three-quarters of the Rock’s women have their hair set already. Even women who should know better, grannies and the like, have been getting blue rinses since Easter almost on a weekly basis. Women from as far as Moortown were coming here to get their eyebrows mowed or for Turkish shaves. I’m completely out of Pond’s anti-wrinkle cream. The Fitzgerald family from Derrytresk bought the whole box. You’d think Robert Redford had landed in the county. Deadly stuff altogether.”

Mary’s have reported a rise in toenail cutting appointments from Eglish and hairy chin removals in Lissan with a noticeable rise in Tattyreagh women looking ‘them there push-up bras’. Omagh women have been the highest users of the leg-shaving services, preferring the cut-throat blade after years of neglect. Not all reports have been of a positive nature with stories of sabotage leaking through to us on a regular basis. Fr Kelly from Donaghmore says it could cut up rough yet:

“I see the way the wemen are looking at each other during mass, especially at those wearing new frocks. I saw it coming but last week a woman tripped her cousin going up for communion, ruining her sexy trendy banded casual above the knee mini dress, not that I would know about those things. I caught two of the sacristans pulling the hair out of each other during Stations of the Cross. I’ve a bad feeling about how this will end up.”

Neglected Tyrone Husbands have started up a website to cater for men who feel a bit hacked off about the whole thing. They can share stories and have a good old communal cry.