A new Tyrone GAA Xbox game has broken pre-sales records across the country after early gamers confirm the new features are more realistic than ever.

After scathing reviews of previous incarnations, GAA in the gaming world finally comes to life in what should be the Christmas No 1 game for stockings across the county.

In a press release, game manufacturers explained what makes this version so exciting:

Omagh Building And Construction Limited have confirmed they have sacked the first employee to join their firm since its inception five years ago.

Gary Molloy, a 23 year old Queen’s University graduate in Architectural Engineering from Tattyreagh, was handed the reins for a new flagship estate to be built in the outskirts of Omagh called Acorn Grove which was to signal the first major housing development in the country since the banking collapse.

“It was a bit of a shock. At the lunchtime unveiling of the supposed hi-tech design estate which was attended by MLAs and any hobnob within a 50-mile radius, our man pulled out an Xbox and started showing us around his ‘world’ on a big screen. The penny didn’t drop until he started fighting off zombies and skeletons with bow and arrows and killing pigs and cattle for food. It was quite embarrassing. Young ones nowadays are not really getting the thick line between fact and fiction. On the plus side, the food was great. Full marks to Sallys and their corn beef sandwiches.”

A despondent Molloy remains defiant that he’ll crack the virtual market yet:

“Tyrone is just not ready for an imaginary world built out of textural cubes in a 3D developed platform. I’ll find somewhere else more open minded like Castledawson or Canada. I think the older ones were worried about the zombies and all but you can hack away at them with imaginary pickaxes or shovels and the like. It’s quite simple really and would have made a wonderful addition to the greater Omagh landscape. They’ve missed out big time.”

Molloy was given his marching orders soon after the presentation when an investigation was carried out into his CV claims of being a World Cup winning manager. The confident Tattyreagh man confirmed it was in the FIFA 14 game on the Playstation and that he’d won it with the Faroe Islands six times.

A witch from somewhere on the Ballybeg Road has pleaded with local children to up their game next year after what she claimed was ‘the worst night’s craic in decades’ around Brocagh.

“That was cat. The young’uns now just dress up, ring about two doorbells and then head on home to get wired into their ipads or xboxs. Oh for the great Halloween nights of the 60s and 70s when lads would terrorise the elderly by knocking their windows or throw eggs at police cars. I remember watching a group of boys in 1981 chasing the local primary headmaster with a chainsaw through fields. How I laughed. And sure it was all a bit of fun and the master would forget about it after dishing out 6 of the best and 1000 lines on the Monday.”

The Brocagh Biddy also feels her days are numbered as she only managed to scare one victim yesterday:

“Yes, that is true. There’d be a lot of wemen down here who look a bit like me now, so no one bats an eyelid. I did manage to scare one fella outside Vivo and he dropped his eggs but I overhead him saying he thought it was his ex-wife back looking for more money. Not quite the same pleasure for me. It seems that a woman on a broom, cackling like a maniac and holding a cat, is just your run-of-the-mill Brocagh blade these days.”

Biddy confirmed that she might relocate to Ardboe were badness is alive and well on the Loughshore. A whole herd of cattle had lipstick painted on overnight whilst all the windows were removed from the Battery Bar. 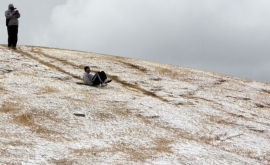 Sliding down a mountain in Pomeroy

A leaked document this morning has indicated that the Pomeroy Village Council (PVC) met up on Sunday morning to draw up armageddon proposals if the snow didn’t thaw any time soon. With all roads leading out of the quiet townland looking increasingly impassable due to the heavy drifting, the secret council met up after Mass and laid down a two-point plan in case of a worst-case scenario. They were as follows:

1. If the roads become totally impassable for more than 24 hours, a time capsule is to be filled with remnants of what life was like in Pomeroy in 2013. Suggested contents included an xbox, a Dandy yoyo, Pomeroy GAA togs, a bit of the mountain, a Wispa, a piece of hair, the Irish News and Philomena Begley.

2. The human race to be kept going as long as possible. This might necessitate eating each other. Everyone over the age of 18 is to write an essay on why they think they should not be eaten. The authors of the worst essays as judged by the council will be slaughtered and fed to the youngsters and babies as they have longer to live and might survive long enough for it to thaw. The council members will only be considered for consumption when everyone else over 18 has been eaten.

The PVC were quick to play down the meeting and its contents today. Danny Devlin, chairperson, stated:

“Ah we got a bit carried away on Sunday morning. The snow flakes were deadly and cars were queued from the bottom of Pomeroy Street to the Bawn Orange Hall. I admit we panicked. I would like to assure the people of Pomeroy that no one will be eaten. All roads seem to be open. In fact none were closed at any stage really. We’ve made a hames of this. Sorry.”

Calls for the PVC to resign en masse have fallen on deaf ears. Devlin laughed when it was put to him and muttered “I’d like to see them try make us” whilst menacingly reaching into his coat pocket and winking.