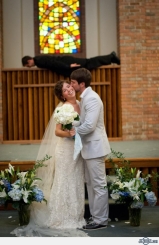 In a move which has been described as ‘draconian’ and ‘pure mad’, Stormont officials have moved to ban anyone from photo-bombing in county Tyrone.

Photo-bombing, the modern phenomenon of unexpectedly dropping in behind someone being photographed, has been on the rise in the county ever since mobile phones replaced Polaroid instant cameras in 2008 as the most popular camera device in homes.

A government insider informed us today:

“Photo-bombing is a throwback to the bad old days. Our many communities don’t need this and that’s why from today anyone caught photo-bombing will be gathered up in unmarked jeeps and interned indefinitely. We want these people off the streets and Tyrone is a good place to start off as there seems to be a rash of photo-bombers all over that land. Ireland says NO to photo-bombers. We might need to re-word the Good Friday Agreement just.”

Initial reports gathered from Twitter and Facebook suggests there have already been three photo-bombers arrested – in Ardboe, Galbally and Loughmacrory, sparking outrage and spontaneous bonfires in all three regions. Galbally tourism director Jill Maguire is adamant there will be resistance to the government’s latest initiative. Using a voice-warp microphone she told us:

“Them boys sitting up in Belfast are out of order. I can’t believe Martin McGuinness has sanctioned this move, and him a serial photo-bomber at football matches and christenings. We’re sending this message out loud and clear – we will not be moved. We’ll be photo-bombing like mad tonight all over the county.”

Although rumours of a continuity photo-bombing group forming in Brocagh are wide of the mark, there has been a rash of digital cameras and balaclavas bought in Dungannon, Cookstown and Omagh today in an obvious show of defiance. PSNI have drafted in 40 UN troops to help monitor the situation. A county holds its breath.