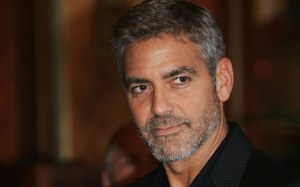 Clooney – rejecting the women of Tyrone

The NI Anger Hotline have confirmed they received 492 calls from chastised husbands since Sunday after George Clooney confirmed he is to marry in Venice in a couple of weeks.

The 53-year old actor, who rivals Pope Francis, JFK and Paddy Heaney for room space on the mantelpieces in living rooms, was still considered an eligible bachelor by the majority of hopeful women in the county.

“Herself has been a bear since Clooney announced his intention to marry a girl in a fortnight. She’s snapping at everything and giving me dog’s abuse for even breathing. It’s a bit humiliating like. We’ve been married 14 years and she still thought she’d win him over by taking him to Derrylaughan for a feed and a few pints.”

Clooney, who once described Plumbridge as comparable to ‘roasting delicious white marshmallows‘, has been asked to reconsider his proposal by a couple of sisters in Clady:

“George’s head is cut. He’s marrying some oul blade who’s probably after his dough. What’s wrong with Clady women? Too good for them, Clooney? If he goes ahead with this then he’s just another selfish man and I’m destroying all my copies of ER and the Oceans films.”

PSNI have urged a bus load of Dungannon women not to travel to Venice to protest outside the ceremony. The 22-strong crowd have already booked a Chambers bus and plan to set out tomorrow with placards reading ‘Clooney, You’re Acting The Dick This Time’, ‘Don’t Do It George’ and ‘No Fracking Here’.