Seskinore Man Proves That The Back Door Draw Is A Fix

A 46 year old aspiring secret agent from Seskinore has phoned the Ulster Herman to say he’s “almost definite” that the back door draw is a fix.

Sean McGrinny revealed always had his suspicions when the draw was on TV but then RTE and the GAA colluded to put it on the radio so no-one could see. The  full phonecall transcript follows:

“Any old fool could be suspicious” mused Sean “when it was TV. The way they’d be pushing the balls around in a big glass barrel that was see through put doubts in everyone’s mind. But then the southerners thought they’d stifle the questions from the north by transferring the draw to the radio”.

“To my shame” confessed Sean, “I nearly forgot to be suspicious myself until last year when I happened to be in Dublin on the morning of the day when Tyrone drew Armagh. I can’t say why I was there being a spy and all but to cut a long story short I found myself in a pub in Donnybrook and there were some people there who looked wild like RTE people. I can’t recall exactly what they were saying cause I was quite pissed but I’ll never forget the big grin on their faces as they looked at me in my Tyrone shirt. It was obviously all a fix”.

“This year I took the liberty of asking people in and around Seskinore who they thought Tyrone would draw. At least 17 people predicted Meath. 18 if you count my mother in law. That was nearly half of the people I asked. Most of the others predicted Derry. Not a single person predicted Tipperary. What more proof do you want than that? The whole thing is a bloody fix”.

“Why is the draw on at 8.30 in the morning when most people are at work. RTE and the GAA thought they had the whole thing sewn up but they didn’t count on me. Being a spy I’m in control of my own agenda so I got up early on Monday morning and sat down to listen to the ‘draw’.”

“Their first cynical tactic to stop people listening was they delayed the news by talking for ages to someone in Athens about whether or not Greece will default on it’s debt. I mean is anyone in Ireland even remotely interested?”.

“When the draw started I turned the radio to full volume and couldn’t hear a single ball being shuffled during the entire affair. The only noise I could hear was someone making tea in the background. As Tyrone drew Meath someone in the RTE studios shouted “Jesus” in a cynical and shameless attempt to fool people into thinking it wasn’t fixed”.

Sean’s proud wife says that he comes from a long line of shrewd observers. His father was one of the first people in Tyrone to realise that men did not land on the moon. He was famous around Fintona and was once told to leave the pub at 2AM simply for insisting that there was something suspicious about JFK’s assassination. Sean’s grandfather was no cod either and had a theory that it was an emigrant from Tattysallagh who helped Shakespeare write 9 or 10 of his best plays.

‘The Little Book Of Derrytresk’ Not Selling Well

Following the phenomenal success of Cathal Coyle’s The Little Book of Tyrone, a Derrytresk entrepreneur has admitted his attempt to cash in on the idea with a local book hasn’t been successful after a month of trading amidst claims of lies and extortion.

The Little Book of Derrytresk was penned by Pat ‘Jam’ O’Neill and retails at the surprising sum of £19.99 despite being only 14 pages long. Local historian and literary critic Jemmy Hanna was not impressed by the publication:

“A score is a bit too much for just over a dozen pages. 8 pages are given over to the Dromid game a couple of years ago and most of that is just pictures of handbags that were possibly used in the attack on Declan O’Sullivan. He’s ripping the arse out of it at that price. The Little Book of Tyrone is brilliant. This one is….middlin.”

Hanna was also critical at the section labelled ‘Famous Sons of Derrytresk’:

“Jam is just making stuff up now to pad the thing out. He says Tom Cruise, Elvis Presley, JFK, Napoleon, Wolfe Tone and Moses can all be traced back to Derrytresk through their DNA. I’m very dubious about this. I do know that Foster and Allen drove past The Hill on the way to a concert in Edendork but that’s as good as it gets.”

“People hate to see you doing well. It took me two full weeks to compile this comprehensive history of my homeland, and £20 is about right. There’s women here that would spend that amount on sun beds and nail brushes. Feck yiz all. We can’t all be Cathal Coyle and him backed by millionaires from America. “

Clooney – rejecting the women of Tyrone

The NI Anger Hotline have confirmed they received 492 calls from chastised husbands since Sunday after George Clooney confirmed he is to marry in Venice in a couple of weeks.

The 53-year old actor, who rivals Pope Francis, JFK and Paddy Heaney for room space on the mantelpieces in living rooms, was still considered an eligible bachelor by the majority of hopeful women in the county.

“Herself has been a bear since Clooney announced his intention to marry a girl in a fortnight. She’s snapping at everything and giving me dog’s abuse for even breathing. It’s a bit humiliating like. We’ve been married 14 years and she still thought she’d win him over by taking him to Derrylaughan for a feed and a few pints.”

Clooney, who once described Plumbridge as comparable to ‘roasting delicious white marshmallows‘, has been asked to reconsider his proposal by a couple of sisters in Clady:

“George’s head is cut. He’s marrying some oul blade who’s probably after his dough. What’s wrong with Clady women? Too good for them, Clooney? If he goes ahead with this then he’s just another selfish man and I’m destroying all my copies of ER and the Oceans films.”

PSNI have urged a bus load of Dungannon women not to travel to Venice to protest outside the ceremony. The 22-strong crowd have already booked a Chambers bus and plan to set out tomorrow with placards reading ‘Clooney, You’re Acting The Dick This Time’, ‘Don’t Do It George’ and ‘No Fracking Here’.

Travolta To Appear In Coalisland For Grease Production? 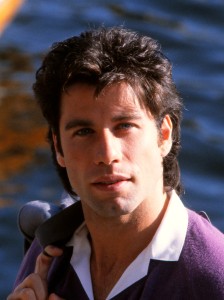 Speculation is rife this morning in Tyrone that John Travolta might be playing a major role in the Coalisland Na Fianna production of Grease in early March, according to local sources. The identity of the roles for Danny and Sandy have been kept under wraps since rehearsals began weeks ago, with many speculating on various celebs such as Dennis Taylor, Peter Kay’s mother, Damien O’Hagan, Anne Brolly and Peter Herron.

However, late last night, three Coalisland men were spotted getting into a car on Lineside and shouting about ‘headin to the airport’ and ‘yee-har’. One of the Grease backroom team admitted John Travolta was on their radar:

“To be honest I’m worried. Our first performance is Friday 7th March and we probably should have approached Travolta before now. Anyhow, we’ve sent our three best negotiators to America to convince John to head over here and give us what we want. It was hard trekking him down online on facebook and stuff so the lads said they’ll get the first flight to anywhere in America and just ask about when they get there.”

The identity of Sandy also remains a mystery with strong talk of Damien O’Hagan in drag being a possibility. Local hairdresser Jenny Timlin reckons the chemistry between Travolta and O’Hagan is mouth-watering:

“I’m weak at the knees even thinking about that possibility. There’ll be a whole lotta shaking going on. Even house in Coalisland has a picture of  JFK, the Pope and Damien O’Hagan. John and Damien singing ‘You’re The One That I Want’ in harmony would make millions if released. We’re hopelessly devoted to O’Hagan around the parts. There’ll be tears on my pillow if they don’t go together.”

“Shows like this should only be for summer nights. If Travolta shakes his hips like a hound dog and gets the wemen screaming, he’ll be put into the boot of my motor and driven to Aldergrove like lightning. Dennis Taylor too. O’Hagan can do what he wants.”

This event will take place on Friday March 7 and Saturday March 8 at 8:00 pm.

Stewartstown locals have admitted they are slightly unnerved by the ‘rakes of boys talking down their sleeves in American accents’ walking about the town this week in the run up the anniversary of JFK’s assassination in 1963. Stewartstown has been on everyone’s lips across the world this week due to their home-town boy and Special Agent William Robert Greer who joined the Secret Service in 1945 having served in the US Navy during the war. He was a trusted servant and acted as a personal bodyguard to both Presidents Truman and Eisenhower before being chosen to drive John F Kennedy through Dallas on 22 November 1963.

The FBI appear to have not just reopened the case against Greer, but are actively pursuing the theory that Stewartstown may have been central to many international incidents over the last century. Some of these include:

“Greer may be an innocent man but the more we learn about his homeplace, the more we’re sure that this may just be the dastardliest place on planet Earth. Just yesterday I heard a man outside the Credit Union saying the whole Kennedy stuff was going to be ‘deadly’. What did he mean? What are these monsters going to carry out? Make no mistake – Stewartstonians are capable of anything in our book.”

So far, the FBI have raided 60 homes looking for incriminating evidence on PCs and under beds. Unfortunately only one computer has been found and it was a Commodore 64 from 1986 in full working order. They’ve also confiscated 120 books, 90 of them a pamphlet on the history of the Stewartstown Pipe Band. The other 30 were Fifty Shades of Grey.

“They’re a tarra nuisance with their ‘hey men’ and ‘got any candy lady?’. They’ll find nothing here”

concluded Logan with a wink and a gap-toothed smile.