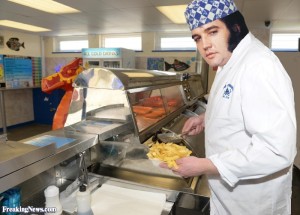 Lottery auditors have descended upon a West Tyrone GAA club after Elvis Presley won the £3000 snowball prize for the third time in 3 years, adding to other winners such as ‘Tom Jones’, ‘Clint Eastwood’, ‘Calamity Jane’ and ‘Shergar’ since the lottery commenced in 2012.

Killeter GAC Committee admitted no locals had ever won the big prize in the lottery but denied making up winners in order to pocket the prize fund for annual outings to Bundoran and Downings.

Local carpenter and lottery fanatic Killian Penrose remains adamant that something fishy is going on:

“They’re not even putting much effort into covering it up. Who’s called Elvis Presley, like? Barry Gibb from the Bee Gees has won it 4 times now. And as for Shergar….”

Killeter GAA hit national headlines in 1988 after advertising the opening of their new field ‘Castlederg Road Park’ with astronaut Neil Armstrong and Mahatma Gandhi as their special guests, organised by chairman Leo Hurson.

“And that was a farce too. This boy in a spacesuit turned up, helmet and all, and sure he was only 4 feet tall. I’m sure we’d have known if Armstrong was only 4 foot. And Gandhi had been dead 40 years. He just had some man from Aghyaran dressed in a sheet, waving to people.”

Chairman Hurson was unavailable for comment this morning but an inside source confirmed that there’s an Elvis Presley who works in a chip shop in Castlederg Main Street.

‘The Little Book Of Derrytresk’ Not Selling Well 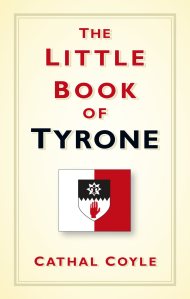 Following the phenomenal success of Cathal Coyle’s The Little Book of Tyrone, a Derrytresk entrepreneur has admitted his attempt to cash in on the idea with a local book hasn’t been successful after a month of trading amidst claims of lies and extortion.

The Little Book of Derrytresk was penned by Pat ‘Jam’ O’Neill and retails at the surprising sum of £19.99 despite being only 14 pages long. Local historian and literary critic Jemmy Hanna was not impressed by the publication:

“A score is a bit too much for just over a dozen pages. 8 pages are given over to the Dromid game a couple of years ago and most of that is just pictures of handbags that were possibly used in the attack on Declan O’Sullivan. He’s ripping the arse out of it at that price. The Little Book of Tyrone is brilliant. This one is….middlin.”

Hanna was also critical at the section labelled ‘Famous Sons of Derrytresk’:

“Jam is just making stuff up now to pad the thing out. He says Tom Cruise, Elvis Presley, JFK, Napoleon, Wolfe Tone and Moses can all be traced back to Derrytresk through their DNA. I’m very dubious about this. I do know that Foster and Allen drove past The Hill on the way to a concert in Edendork but that’s as good as it gets.”

“People hate to see you doing well. It took me two full weeks to compile this comprehensive history of my homeland, and £20 is about right. There’s women here that would spend that amount on sun beds and nail brushes. Feck yiz all. We can’t all be Cathal Coyle and him backed by millionaires from America. “ 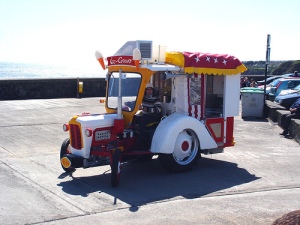 Strabane District Council have warned locals not to buy off an ice cream man circling the town and country areas after it was revealed how extortionate the vendor was, exploiting the unbearably good weather and thirsty customers.

Mr Frosty arrived on the Strabane scene two weeks ago after recognising a gap in the ice cream market in the surrounding area. To the tune of ‘My Boy Lollipop’, the ice cream man has been terrorising a sun-baked community by charging £6.99 for a 99 or £5.99 without the flake.

“We need the UN to intervene or Points of View or something. We’re frying up here in this heat and that man is driving us mad with his music and lovely white van. It’s an oasis in the desert but he’s ripping us off. I bought my daughter and her friends a round of 99s last week and it cost me £69. When you see their wee faces you cannot go back on the transaction. But see if I meet Mr Frosty in a dark alleyway he’ll want to top himself and not the ice cream, which also costs an extra £5 by the way.”

Mr Frosty, who normally goes by the name of Mr Frost, is adamant that he’s simply an honest man making a living in a tough climate:

“Listen, I’m sitting all day in this van listening to My Boy Lollipop and people screaming at me from the fields and sides of the road. I feel like Elvis Presley. Everyone wants a piece of me. £6.99 for an ice cream with flake is nothing to these people with their iPads and loom bands. What price a child’s happiness? It’ll be £7.99 next week.”

Investigations reveal Mr Frosty was chased out of Clady last year after it was revealed he sloppingly licked the 99s of the children who didn’t have enough money on them before handing the 99 over over.

St Alphonsus’ Church in Listamlet have apologised to Gerry and Mary Brennan of Clonfeacle after a mix-up in their audio saw ‘The Sally Gardens’ mistakenly replaced with Chris Rea’s worldwide hit ‘Road To Hell’ as the bride walked up the aisle.

To add to their woes, the altar boy was unable to turn off the song, leaving the wedding party and congregation listening to the entire 5-minute extended version of the chart topper which includes the lines “And the perverted fear of violence/Chokes the smile on every face”.

“Some balls-up. The worst part was the altar boy fumbling to turn the thing off. We had to listen to that man sing the ‘Road To Hell’ line over and over at the end. The young girl was in tears thinking her husband-to-be was sending her a subliminal message. Why didn’t they cut the wires?”

Fr Cushnahan was at pains to explain how the song ended up on the church’s private music selection in the first place.

“Ah I was just codding around one day with funny songs to play in a church, just to show that you can have a laugh with God and all. Elvis’s ‘Devil In Disguise’ was another one I had on it. Thank feck that one didn’t play. The husband would’ve been afeard to turn around and look under the veil. I’ll just put this one down as a learning experience.”

Meanwhile, St Alphonsus’ have offered, by way of compensation, a year’s supply of confessions for the couple with a guarantee of very little penance.

Ballygawley Priest, Banned From Singing During Mass, To Defy Orders. 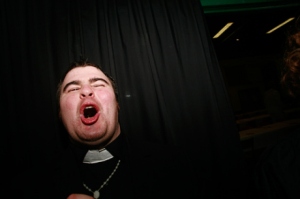 Shevlin during the Our Father

A Ballygawley clergyman has been told by his peers to cut out the singing parts during any service due to complaints from the congregation that it was setting off hearing aids and bothering babies. Fr Shelvin (61) has been PP in the area for a few years and often sang up to 50% of the mass, even bits of his homily. The church sacristan, Maggie McAleer, maintains it was about time action was taken:

“I vividly recall the first time I heard him sing. It was like a cross between a cat in heat and rubbing a shovel fornenst metal. He’d be singing nearly every bit of it too, even whilst dishing out the communion. At the end everyone used to roar ‘Thanks be to God’ but I think they meant it in a different way than oul Shelvin thought they did. People would run from the building, weans crying and pensioners banging their hearing aids. You’d think in Maynooth they’d practise the singing a bit during those seven years”

Reports suggest a recording was sent to the current Pope who supposedly cursed in Italian before slapping a ban on him singing until he was trained up by one of those singing priests. Shelvin is reluctant to follow orders:

“These Ballygawley ones would need to lighten up a bit. When I was seven I won the Quinn’s Corner ‘Sing Like Baby Elvis’ competition with a spirited rendition of Wooden Heart. You don’t become a bad singer overnight like. I’ve sent Pope Francis a tape of me singing ‘The Heat Is On’ and ‘The Final Countdown’ in the bath this morning. Who does he think he is anyway – Simon Cowell? I’ll be singing this Sunday so the people of Ballygawley can lump it.”

Bookies reckon there’ll be no drop in numbers as Shelvin does Mass in 23 minutes on average, more than half the time of the other boy in the parish. Skin-coloured camouflaged earmuffs will be sold outside though by McAleer with funds going towards 100 pairs of gutties for the local walking club.