A local Coalisland man who lost his job as a weatherman and also as children’s TV presenter, was sacked earlier today, for trying yet again as a weatherman on new channel Irish TV.

Henry Savage, from Brackaville Road, was given the job at short notice following the unexpected departure of the previous weatherman. He explained,

“The boy who was supposed to get the weather job suddenly backed out down because he had to rush off to London in a hurry. I think he was changing jobs to a tree surgeon because he mentioned something about a yewtree. Anyway, I was in there like a shot. There’s not much you can teach me about the weather hi”.

However, it quickly became apparent to studio bosses that this was far from the case, and that Savage’s grasp of simple meteorological principles was practically non-existent.

“We had a couple of wee thunderstorms over the weekend there”, said programme scheduler Moira McGurk, “And Savage told viewers that it was because ‘the clouds kept banging together’. For the love of God”.

“Thon trees in Parkanaur are making lots of wind tonight, so wrap up tight. And if you do see the thunderstorm coming, just rush out of the house and start screaming at it. They frighten easily and it’ll probably just move off to the next town”.

In his defence, Savage barked:

“All that stuff about the high fronts and the low fronts is just stuff made up by meteorologists to confuse people. Rain is rain. Anyone in Tyrone knows that. No point going on and on about types of cloud or precipitation or some such nonsense, when everyone knows rain is just the angels crying tears of happiness”.

“Ah’m tellin’ yez, last night my yolk was acting up something tara, so it’s a sure sign that there’s quare sunny weather on the way. And have yiz seen the sunset over Clonoe? All I can say is, red sky at night shepherd’s delight. No, hold on. Is it rainbow instead of red sky? Jays, it can be confusing. Ah sure, what do the feckin’ shepherds know anyway? They should keep their noses out of it. Besides, it’s not going to be sunny everywhere. The cattle in Edendork are getting tore into the cud like nobody’s business, which means the rain’ll be shitting it down in Drumquin by lunchtime tomorrow”.

Savage in his final broadcast earlier this morning, confirmed that he expected the forecast for tonight to be ‘dark’.

Leaked Document Shows County’s Efforts To Get On Irish TV 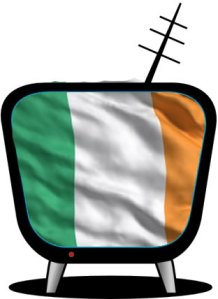 to get ensure the county gets plenty of coverage on the new television channel, Irish TV, which was launched last year.

The confidential paper outlines some programme ideas and their content which was brainstormed by senior councillors, many of which will apparently go into a final proposal to be submitted to Irish TV. Some of those ideas include the following: –

A sitcom about a loud, nosy, foul-mouthed Irish patriarch and his family which is filmed in front of a live studio audience. Contains faintly humorous dialogue miraculously turned into hilarious comedy gold by the adding of ‘feck’, ‘fecking’ or ‘fecked’ to every other line.

Tyrone’s version of the BBC’s Dancing on Ice, but filmed outdoors instead of inside. Celebrities from around the county skate on a permanent field of ice whilst battling sub-zero temperatures, howling winds and freezing rain, in the middle of summer. To be filmed at the Garvaghey Complex.

Lynette Fay, presenting Country Afternoon in a bright red bathing suit, whilst being chatted up by David Hasselhoff wearing badly-fitting swim shorts, standing on top of the Berlin Wall.

Some of the funniest lines by Tyrone’s parish priests caught on camera, including side-splitting communions, hilarious funerals, month’s mind bloopers, and secretly-recorded confessions by Tyrone’s faithful.

A wildlife programme, this half-hour special will feature the indigenous but rarely seen strange and exotic creatures of Tyrone, including grass snakes, pollen fish, and Coalisland traffic wardens.

PJ and Hugo Duncan re-live their 90s classic hit, ‘Let’s Get Ready To Skiddly Dee’ which got to number 16 in the Strabane pop charts in 1986. Performed in front of a disapproving Simon Cowell.

A movie about the perils of drinking far too much at Sense nightclub in the Glenavon Hotel, where a combination of pounding music, the smoke machine, alcohol, and desperation, leads to poor partner-selection on the dance floor. Followed by Gorillas in the Mist.

An Aughnacloy farmer who claims he thought he was simply growing Christmas trees in his greenhouse has been charged with manufacturing £300’000 worth of cannabis plants in six months.

Mickey Gildernew, a 66 year old gardening enthusiast and non-smoker, admitted he was surprised at the massive turnover of his Christmas tree sideline especially as it appeared to be selling just as well in July as in December. A PSNI raid revealed a further 300 cannabis indica plants ready for sale this morning.

“Honest to God, my eyesight wouldn’t be deadly. I thought I was growing Christmas trees for the family and after a few boys called one day looking to buy the trees off me I decided to keep it going and churned out over 1000 trees since February. I did think it an odd time for people to be buying them and I also thought it strange that they were mostly young men with long hair buying the stuff. But, at £40 a tree I wasn’t complaining.”

Local student and chain-smoker Patsy McGleenan (19) admitted he was sad to hear of Gildernew’s demise:

“Ah I gutted to hear of Weisenhager’s arrest. We gave him that name as he was the most convincing drug baron I know. He would use code phrases like ‘putting a fairy on top’ and ‘hide your presents under it’. We hadn’t a clue what he meant but he obviously knows more about this business than we’ll ever know. With Weisenhager’s stuff off the market, it’s back to Irn Bru and Sherbet Dips for my kicks.”

Mickey ‘Weisenhager’ Gildernew will appear before a jury in December in an event due to be televised live by new national TV station IrishTv. This week there will also be a two page supplement on Christmas trees in the Tyrone Times tomorrow.