Clonoe Man Confirmed As Being Almost 116,000th In Line To The Throne 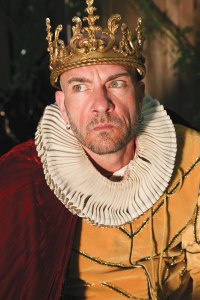 News emerged last night that an unemployed mechanic from Clonoe is apparently 116,263rd in line to the throne.

“It’s a massive responsibility hi”, admitted Daragh ‘Red Boy’ Loughran cheerfully. “There’s a huge expectation on me that if something happens to the Queen, Prince Charles, William and 116,260 others, then it would be down to me to run the show. And let’s face it, the Queen’s not getting any younger is she, so that’s almost one off the list already. Won’t be long boys, won’t be long”.

The Northern Ireland Institute of Genealogy confirmed the news last week that Loughran was related to the monarchy through a distant relative on his father’s side who was related by accident to Edward VIII.

52-year old Loughran, an active member of Sinn Fein since joining the party in 1987, has had his commitment questioned by other members and close friends since making the announcement.

“Aye, maybe it’s a wee touch embarrassing what with all the demonstrations and the marches I’ve attended over the years. Then there was the handlin’ with all graffiti and vandalism. And the trouble with the police. But that was all just a misunderstanding sure. I was actually shouting ‘Love the Queen’. They just misheard me, that’s all. She’s a nice wee woman. And I’ve always loved Helen Mirren”.

“People have questioned me about my values, but sure, why can’t I be a Republican at the same time as being King of England? What’s wrong with that? And anyway, if my principles don’t fit with my lifestyle, I can always change them”.

Sheila, Loughran’s wife of 30 years, was doubtful of her husband being able to make a smooth transition from unemployed layabout to head of a 600-year old world-renowned royal dynasty.

“For a start, he’d have to learn how to use a knife and fork”, she said. “Jaysis, you should see that wan eating his tea. It’s like a Labrador eating custard. How’s he supposed to have lunch with the likes of David Cameron and Ronald Reagan if he insists on licking all the gravy off his plate? Maybe the Palace staff could sort something out and get one of their footmen to bate his dinner intae him. That might work”.

She confided that Loughran was already preparing for the role.

“Aye, he’s hard work. He’s started walking around with his own toilet seat the bollix, and every time I get back from the shops he keeps asking me, ‘Have you travelled far?’ I’m getting fed up with it”.

Loughran however rejected the concerns.

“Eating won’t be a problem. Sure, loads of them soldier boys in London love eating beef, which I do too. I’d fit right in hi, once they got the crown re-sized. And I’d be head of the British government too, so it’d be free Tayto for all, and I’d abolish annual MOTs. They’re a pain in the hole. £350 it cost me last month.  Oh aye, and I’d do something about Irish independence too”, he added hurriedly.

In preparation for receiving a call from Buckingham Palace, Loughran confirmed he had removed ‘Men Behind The Wire’ from his iPhone playlist.