Although both Stephen O’Neill and Peter Donnelly have remained tight-lipped about their departures from the Tyrone set up in recent weeks, it has emerged that a price hike in sausage rolls last month at the Garvaghey Training Centre near Ballygawley may have been the final straw for both former members of the backroom staff.

Sources close to the county set up maintain that uncertainty over Brexit has panicked the Garvaghey kitchen staff and that, in response to this, they have increased the cost of a sausage roll by 70p to £2.20.

Donnelly and O’Neill were famed for their legendary consumption of sausage rolls, with the Coalisland trainer Donnelly scoffing up to 8 sausage rolls a day whilst shouting at players for not running harder. Former All Star O’Neill was also a prolific sausage roll devourer during his playing career, often celebrating big wins by downing a 2-foot sausage roll from the chip shop in Aughabrack.

“Expect more. Horse Devlin is holding out so far but it’s costing him a fortune. They’re also charging 10p a sachet now for the brown sauce.”

Meanwhile, in the absence of a strength and conditioning coach, the county board have drawn up an initial training schedule for January which involves running around the dog track in Dungannon after Dublin’s Jack McCaffrey.

Is Nominative Determinism More Prevalent In Co. Tyrone Than Anywhere Else On Earth? 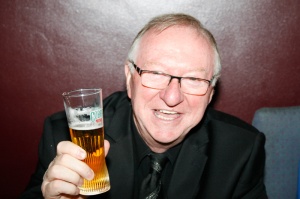 The phenomenon of nominative determinism – which describes the increased likelihood of choosing a profession as a result of being born to a particular surname – is currently being studied to see if location also has an impact on adult career choices.

A Tyrone Tribulations envoy met with Professor Johnny Pointless and his students at Oxford University’s sociology department, and hoped to prove that none other than our very own County Tyrone has the highest incidence of name-sake related jobs.

“It has long since been held that there is a strong link between one’s family name and the professional path people choose in life” professor Pointless told us, “even back to Shakespearean times. A look at some of the Co. Tyrone examples are quite remarkable, if true.”

Examples discussed included world famous golfer Darren Clarke, who spent his early years as a junior bookkeeper, training to be an accountant with a Dungannon firm. Unfortunately for Tiger Woods et al, Clarke decided in his early 20s that he wanted to explore another field.

Another Tyrone example was that Dennis Taylor had been a clothing alterations specialist at a formal dress-hire company in Dungannon. Taylor finally got fed up measuring lads for their school formals, and taking up trousers, so he decided to head for the dole queue. Soon he bridged the gap between Ireland and England, pocketing a fortune over the years.

Taylor did always however maintain contact with his protégé, local tv and radio star Malachi Cush, who himself was an all-Ireland snooker and pool underage champion. This example of nominative determinism explains why Taylor’s trousers were always impeccable during snooker tournaments.

Tyrone Tribulations also informed the Oxford team of the two brothers from Derrylaughan who have been running a very successful ‘Sahara animal trekking experience’ tour business along the romantic shores of Lough Neagh.

Following from their popularity, ‘Camel’s Riding School’ looks set to open for local kids parties this coming September. While Oxford pointed there were “parochial pronunciation issues at play” (Campbell versus Camel) this still did in fact qualify as a case where one’s surname had an influence on their paid profession.

Post and present Tyrone senior footballers and great friends Darren McCurry and Ryan (Ricey) McMenamin are opening a chain of Chinese takeaway restaurants in Dromore, with half and half a discounted special. This, also we are told, does qualify.

Other examples we raised with the team included former footballing greats such as Mickey Coleman, who has decided to put down his guitar and has stocked up on household fuels for the winter months. Chris and Stevie Lawn have obtained a franchise for a gardening firm and are presently seeking contracts round Moortown and Ardboe.

Former last gasp saviour and ‘keeper, John Devine is rumoured to be down in Maynooth in the early stages of becoming a deacon which was also accepted within the guidelines set primarily by the dictionary.

Stevie O’Neill being ‘a deadly man on a size five ball’ is not something the panel would accept at this stage, although we have arranged they be flown over to the next Clann na Gael training session to help reverse their decision on the 2005 Footballer of the year.

When we informed them of a postman in Coalisland called Pat, researchers confirmed that this was just an amusing coincidence and didn’t really qualify as nominative determinism. Also Mickey Harte, being universally loved all around the County, was “a totally separate matter… maybe if he was a surgeon or something” stated Pointless… little does he know we told him.

Following recent reports in the Irish News that proud gay boxing champion, and great fella, Junior Quinn from Clonoe wanted to be called ‘Queen’ again, Oxford’s boffins ruled this was just a pronunciation issue, “and again totally different to what we have been telling you all day.”

Also mentioned was Big Willie Anderson the Dungannon and Ireland rugby great who we said has tried to dismiss talk of some 1980s videotapes he made.  Added to the disappointment that we could not produce the tapes, Pointless and his team indicated it would not have been counted anyway as Willie is a Christian name, not his family name, and ‘Big’ is an endearing term for the man because he is so well liked around his town.

While we await the final outcome to be announced, it can be confirmed that Tyrone is in the final two areas being reviewed. Also in the running are the Choctaw Indians of the USA, who actually do include an awful lot of real Indians. 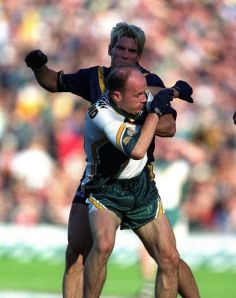 It was confirmed last night that a long-awaited fun park will definitely open in Tyrone next year without doubt, subject to funding, planning applications, sponsors, advertisers, environmental concerns, staffing, and demand for tickets.

‘Canavan World’, a family fun park based around the celebrated and popular GAA Tyrone footballer Peter Canavan, is the brainchild of 52-year old Aiden Kerrigan, a professional beard grower and entrepreneur from Ardboe.

“Make no mistake”, announced a bold Kerrigan, “My ambition for a project of this scale knows no bounds. Canavan World is going to be biggest thing this side of Craigavon. Aye, that big. Peter’s some boy and he deserves worldwide recognition. This park will make him more famous than Bono, Sting and His Holiness all put together”.

In a bare-faced show of audacity Kerrigan intends to base the park close to Canavan’s home town of Glencull in direct competition with the nearby Ballygawley play park.

“Fair enough, Ballygawley might have a swing and a slide and a wee bin for smokers, but I’m confident we can go head-to-head with it for the international tourist trade”, declared Kerrigan.

Leaked documents confirm that some of Kerrigan’s proposed ideas and attractions include: –

•    ‘The Peter Canavan One-Man Show’ – doesn’t involve the man himself but instead a video replay of the entire 1995 All-Ireland Final against Dublin, when Canavan scored nearly all of Tyrone’s points on his own.

•    Church of Canavan. A brand new church dedicated to Peter, blessed by the Vatican, where converts spend three hours a week praying to Vidal Sassoon, patron saint of follicles, for Peter to grow a big bushy head of luxuriant blond hair.

•    Peter Canavan Arena.  Like Las Vegas but bigger. Malachi Cush to do a 10-year residency, like the ones Elton and Celine do.  Ask Philomena to do it when Malachi wants a weekend off.

•    Premier showing of ‘The Karate Kick’. Re-make of the 1980’s movie, ‘The Karate Kid’, starring  Peter Canavan as an old Japanese man teaching Eoin Mulligan the ancient and mystical secrets of how to elbow a defender in the face without the referee seeing.

•    Peter’s Water World. The man himself re-enacts some of his greatest goals, in a tank filled with 3,000 gallons of water and a killer whale.

•    Canavan’s ‘Goal-er’ Coaster. A chance to watch Peter’s greatest points whilst travelling at speeds of up to 140mph, whilst sitting beside a cub scout who’s trying to drink orange and eat a cheeseburger.

•    Peter Canavan Circus: Featuring Hugo Duncan as the ringmaster, Mickey Harte as the lion tamer, Stephen O’Neill as the strongman, and Joe Brolly as the clown.

Volunteers wishing to get involved with the project should submit a full CV with doctor’s certificate confirming they haven’t lost their marbles, to http://www.doomed-to-fail.com