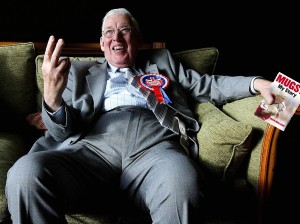 Paisley and his tattered Mugsy book

The late Ian Paisley’s vast personal library, which opened for any member of the public to come and browse through a collection of 55,000 volumes, produced a couple of surprises after it emerged that Eoin Mulligan’s autobiography ‘Mugsy – My Story‘ was given pride of place at the front door, encased in bullet-proof glass.

Paisley, who rarely attended GAA games, is said to have closely identified with the Cooktown sharp-shooter and attended his book signing incognito, dressed as a farmer from Lissan.

Our journalist, Kenny Archibald, was allowed a sneak flick through Paisley’s copy and noticed a couple of annotations on the book:

“There were a few pages when Mulligan is describing an amusing incident in his life and you can see where Paisley has written ‘LOL’ or ‘some crack’. The chapter where Mugsy describes getting suspended from school for mooning out the window is heavily annotated with one comment, written in red pen, saying ‘he’s some boyo’. It’s obvious there was some connection between the pair.”

Archibald went on to describe a more startling revelation:

“More importantly, the book was signed at the front by Mulligan with a personal touch. It read ‘To the big Rev – Keep er lit – Lámh Dhearg Abú! ‘, suggesting Mugsy knew rightly on the night of the book signing that the farmer from Lissan was actually the former leader of the DUP. It’s quite a remarkable friendship.”

Coalisland journalist Ronan McSherry’s book Ronan’s Rants was also amongst Paisley’s collection. The only annotation was a moustache which Paisley had drawn on McSherry’s face. 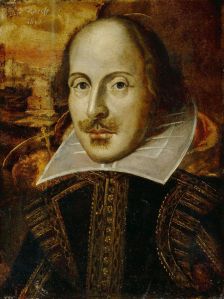 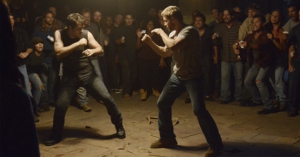 Former US diplomat Richard Haass has admitted defeat for the second time in a couple of days after his efforts to resolve the Ardboe Christmas Tree dispute ended in several parties tearing the heads off each other.

Haass, who admitted Ardboe was a ‘wild place’ on a par with Kosovo and Sierra Leone, was able to narrow it down to four celebs after intense negotiations:

“We managed to rule out McGuckin and Lawn as we suspected they were there to sabotage the event, being enemies in some shape or form. The cost for the Pope was astronomical. Apart from the flights, the pot holes would wreck the popemobile. No insurance around here. Harte, McAleer, McSherry, Taylor, Cush and McGurk were ruled out next during the eel-skinning demonstration.”

With Coleman, McGuigan, Devlin and Billy Ray Cyrus left, tensions were beginning to reach boiling point with accusations of bribes and counter arguments over ancestry muddying the waters.

“I thought dealing with Robinson and McGuinness was tough. These guys are stubborn. It ended up in a bare-knuckle contest between all four.”

Haass left the scene an hour into the free-for-all, admitting defeat and vowing never to return to the island again.

Coalisland Christmas Investment To Be All Spent On Deadly Tree 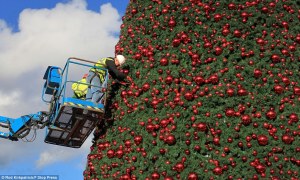 Coalisland will be the envy of the world this year after a secret Christmas committee finally decided to spend the recent windfall on a deadly tree.

The news that £15’000 would be spent on decorating Coalisland this Christmas had set tongues wagging for weeks as to what it will be spent on. In order to tap into the excitement, Coalisland council ran a competition asking residents to put their ideas into a suggestion box outside Sullivan’s on the Main Street. The closing date showed that 400 suggestions had been made with the top five listed below:

Coalisland independent councillor Pat Campbell was impressed at the wide range of ideas:

“There were some brilliant bits of thinking in Coalisland. Unfortunately we just had to turn down most to appease some groups like the NASA, RSPCA or the UN. One I liked was to decorate all animals like cows and dogs with glittery bells, balls, stars and all that stuff. We decided to pump the whole £15’000 into a deadly tree  to be placed inside the Cornmill with a hole cut in the roof for it to stick out. It’ll be about 300 foot tall and we’ll get it from Brazil.”

Our investigations showed that £12’000 will be spent on transport from South America, £2000 on decorations, £500 for John Stokes for the loan of his truck and £500 on cocktail sausages for the opening.

The next big question is who will turn on the lights with local bookies offering mouth-watering options: